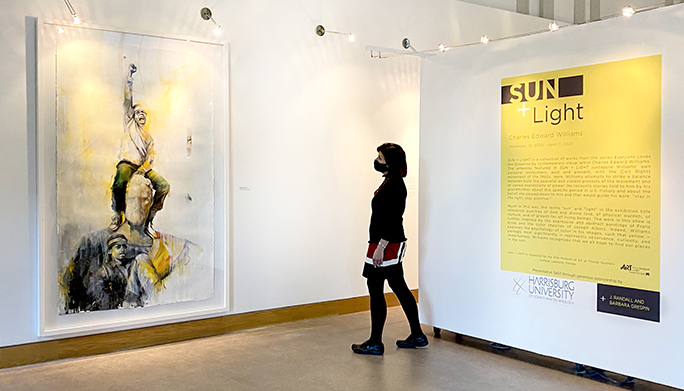 Black History Month is an annual observance originating in the United States, where it is also known as African American History Month. It began as a way of remembering important people as well as the events in the history of the African diaspora.

The idea behind celebrating African American achievements originated in 1915 by historian Carter S. Woodson, along with other prominent African American figures of that era. The group chose the second week of February 1926 to celebrate Negro History Week, which has since evolved to Black History Month. The week was symbolic in that it was the same week as the birthdays of former President Abraham Lincoln and of Frederick Douglass, an escaped slave and prominent abolitionist. In the late 1960s, the week celebration became a month-long event.

Since the Susquehanna Art Museum (SAM) moved to Midtown in 2015, the vaunted art institute has featured numerous exhibitions that highlight the many contributions the African American community has made and continues to make in the art world. It has long been central to the narrative for SAM to prominently promote the myriad metamorphoses that the community of artists has undergone over time.

Starting in 2016, the landmark exhibit, “African American Art since 1950: Perspectives from the David C. Driskell Center,” showcased 49 works from 42 artists that included renowned creatives Romare Bearden, Kara Walker, Chakaia Booker, Sam Gilliam and others. This moving tribute was followed up by the extensive “Romare Bearden: Vision & Activism,” drawn from the namesake’s foundation over the summer months in 2018. Bearden was one of the most important visual artists of the 20th century. Included in that exhibit were original collage, rare archival materials, watercolors and even magazine covers. That brings us to current day, in which SAM shares two exhibits incorporating the African American point of view from New York-based painter Felrath Hines and Philadelphian Alma Thomas with “The Modernists: Witnesses to the 20th Century.”

Additionally, with a one-man show by South Carolinian Charles Edward Williams, entitled “Sun + Light,” the museum has embraced its mission statement of inclusivity as almost an institutional imperative, making art accessible to all. Case in point was the recent special opening to celebrate Martin Luther King Jr. Day, during which SAM offered free admission and parking to the general public. Executive Director Alice Anne Schwab related that the daylong event was “extremely well attended and the responses one of appreciation and thanks.”

Anyone who has stood before a monumental work of art at the Susquehanna Art Museum at the Marty over the past seven years has indirectly admired the professional purview of Lauren Nye, the museum’s director of exhibitions. Part curator, part administrator, part conductor, Nye is also the magician behind the scenes who makes memorable art just appear–were it that simple! Truth be told, it’s not, but Nye makes it look that way. The ebb and flow of art arriving in a meaningful manner on gallery walls is a well-devised plan that takes an inordinate amount of thought. Rarely does the director of exhibitions/curator ever hear the round of applause at the end of a museum visit. So, it’s a measurable tribute when accolades are generously given by art patrons.

We experienced that firsthand after a preview through the museum for the most recent exhibit. Lauren led the tour, adding the art’s backstory. Over the years, numerous exhibits at SAM bear revisiting under the watchful eye of Nye and her poetic placement of art. Selecting and procuring the art takes the job description to a whole other level. This is where the art history education plays a pivotal role, so crucial in completing the puzzle.

A 2010 graduate from Millersville University, Nye holds a BFA in sculpture and art history. Stints at Tellus360 and at the now-defunct Isadore Gallery led to her current position at SAM, where she’s about to begin her eighth year. A Lancaster transplant, she now calls Midtown Harrisburg her home professionally and personally.

Social relevance, part and parcel, has always been a mainstay in the approach that Nye uses in bringing art to the forefront. In conjunction with the current exhibition upstairs in the main gallery, “The Modernists,” Nye features the art of Charles Edward Williams, a visual artist from South Carolina in the lobby gallery. This must-see exhibit is taken from the Williams series, “Everyone Loves the Sunshine,” which “strikes a balance between both the peaceful and violent protests of the Civil Rights movement.” The artist drew inspiration from that era of the 1960s. The new exhibit, entitled “Sun + Light,” runs through April 11. 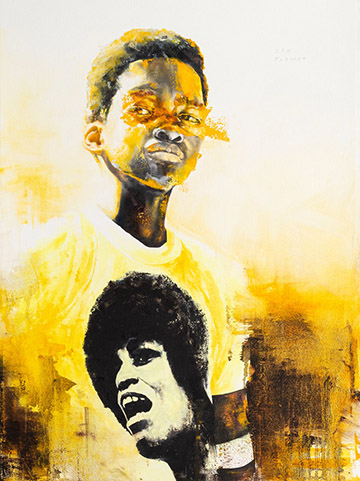 “Sun + Light” was organized by the Polk Museum of Art at Florida Southern College. The Williams exhibit takes an uplifting approach, framing the Civil Rights movement in an ethereal light. Its luminescence bathes the subject matter, as well as the viewer, inviting them to participate in the triumphant spirit of the American dream. A grouping of three portraits is “Yellow (Freedom Riders),” a study in commitment to the cause. Williams shared that his grandmother’s belief was to “stay in the light, stay positive.” As a contemporary artist, Williams embraces her philosophy consistently through his timely art.

On a global stage, 2021 promises us more social discourse regarding equality across all borders and fronts—when and where all races, colors and creeds need to be treated equally for the betterment of the human race. That marathon has been run since the dawn of time, one that none of us can afford to lose. If the past year has taught us anything, it is how very precious human life is regardless of our color and beliefs. In the end, we are truly all the same, one heart that beats and breaks, just like that of our neighbor. That is a cause worth keeping in our collective heart working towards justice for all. Only then will the picture be complete and the masterpiece as it should be. 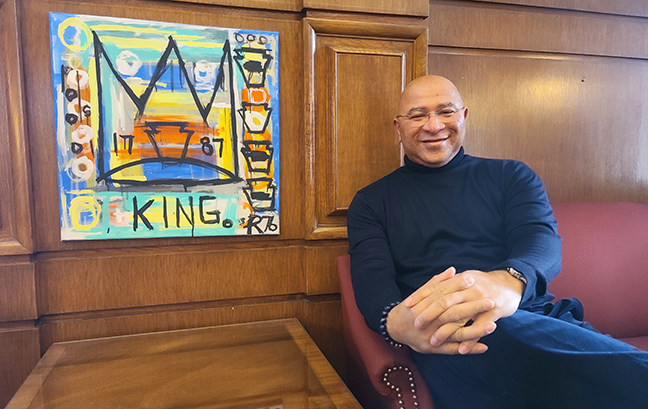 PA Auditor General Tim DeFoor sits in his office next to “The Keystone Kings,” a painting by Reina Wooden (R76).

It is noteworthy to acknowledge the recent swearing in of Timothy L. DeFoor as the 52nd auditor general of the Commonwealth of Pennsylvania, which took place on Jan. 19. Mr. DeFoor’s political career encompasses a number of firsts. He was the first African American to win election to a county row office in Dauphin County as its controller, serving two terms. In his new role as the state’s auditor general, he is also the first African American to hold that position.

Artist Reina Wooden (R76) met Mr. DeFoor years ago at a gala sponsored by the Latino Hispanic American Community Center. In congratulating Mr. DeFoor on his recent swearing in, Reina sent him the Black Wall Street magazine featuring her painting, “The Keystone Kings,” on its cover. Today, her original painting hangs on the wall in Mr. DeFoor’s office in the state Capitol complex. 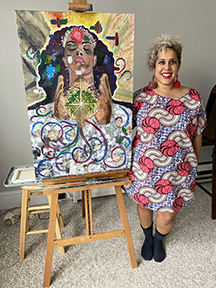 It is with great pleasure that Bob’s Art Blog announces the recent news that local artist Natalie Dohman (pictured) has been accepted as an artist in residence at Chateau d’Orqueveaux in Champagne’ Ardenne, France. Its mission is to select artists who desire to grow and continue their journey of artistic expression. Look for Natalie’s upcoming one-woman show at the Paper Lion Gallery in Lemoyne opening on March 6.

For more information on the Susquehanna Art Museum, visit their website.