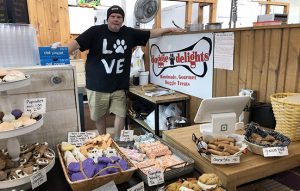 Donnie Farner at Doggie Delights in the Broad Street Market in 2019.

When I first met Donnie Farner over a year ago at the Broad Street Market, he was all smiles, laughs and jokes.

He was quirky, with a paw print T-shirt on, and sold gourmet dog treats—his business Doggie Delights was new to the market, but I knew he’d fit in well. Farner is a likable guy.

As I scrolled through Facebook comments voicing support for Farner and his family after tragedy struck, I realized just how much he and his business had become part of the Harrisburg community since 2019.

“The support that we are getting from the community is overwhelming,” Farner said over the phone as he stood facing the remains of the family’s barn that burned down on Sunday.

He could still smell the smoke as he told me about what they lost that night.

Farner estimated that the fire cost him around $30,000 to $50,000. That included not only the barn itself, but destroyed inventory and equipment for Doggie Delights’ west and east shore market stands. Additionally, they lost new industrial ovens and mixers that they had purchased for new shops they plan to open in Gettysburg and Hershey. The worst loss, however, was his cat, Buddy.

“You never think about this stuff until it happens to you,” he said.

Farner and his wife Kelly’s daughters urged them to reach out to the community, but Farner said they don’t like asking people for help.

Then he saw two GoFundMe pages set up by customers of Doggie Delights, asking people to consider giving to this family who suffered a loss. Community member Kelsey Gesner started a campaign on Wednesday that has already raised over $4,700, and Jamie Mazzocco’s has received $1,800 as of midday Friday.

“They’re always working hard to make customers happy,” Mazzocco, a longtime customer, said. “They give back to the community, and their products bring happiness to our fur babies.”

The pet store community has rallied around Doggie Delights, as well. Shops like Abrams and Weakley in Susquehanna Township and Pet, Bath and Beyond in Camp Hill offered their products.

The Harrisburg Midtown Arts Center (HMAC) offered their kitchen for Farner to use.

“The Harrisburg and West Shore communities have been so gracious,” Farner said. “Thinking about it makes me want to cry.”

Even Harrisburg celebrities like Sharkman, the roller-skating fish who made a Burg front cover this summer, stepped up to help. He posted on Farner’s Facebook page, saying he is painting wooden sharks and selling them to raise money for Doggie Delights.

“My wife started crying and said, ‘someone is sitting in their house painting sharks for us,’” Farner said.

Doggie Delights in the West Shore Farmers Market is remaining open this weekend, Farner said. The Broad Street Market shop is closed, but is expected to reopen next week. Farner hopes to open at their Gettysburg location in April at a new market called the Marketplace at Gettysburg. They will likely open in Hershey in the summer.

When he opened Doggie Delights in Harrisburg, Farner knew that he wanted to become part of the community, but he never thought he would experience it like this.

“We embraced the market and the customers embraced us,” he said.

Doggie Delights is located in the Broad Street Market in Harrisburg and in the West Shore Farmers Market in Lemoyne. For more information, visit their website.