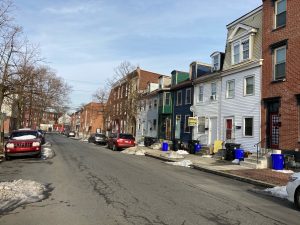 A row of houses on Hummel Street in Harrisburg.

Affordable housing has been a long-debated topic in city hall, but now it seems that words are translating into action.

Harrisburg proposed a package of affordable housing legislation on Tuesday night that would incentivize developers to incorporate affordable rental units into their building plans.

“I am very excited about this,” said Nona Watson, director of economic development in the city. “We are well on our way to establishing our affordable housing program.”

The package discussed on Tuesday consists of several bills designed to encourage affordable housing through the use of incentives like tax abatement and zoning relief. Additionally, the city will satisfy street vacation application requirements, if needed.

Other incentives to developers may include density bonuses, which would permit developers to build more units than allowed by right on a property, explained Geoffrey Knight, the city’s director of planning. Incentives may also include reducing parking requirements. Knight explained that research has found that lower-income households are less likely to own a car.

Developers who apply and receive a Certificate of Qualification will have a set of rules they must follow in order to receive benefits.

According to the proposed Bill 16-2020, which is the heart of the legislation, developers must provide 20% of their units as affordable for low-income households, as defined by the U.S. Department of Housing and Urban Development. The units must be made available to rent at a price that does not exceed 30% of a household’s monthly income.

Additionally, developers need to keep the units at an affordable rent for at least 10 years.

“We want to make sure that what we put out there is actually going to work,” Watson said.

Mayor Eric Papenfuse clarified that the city wouldn’t be forcing developers to include affordable housing, only incentivizing it.

Council member Shamaine Daniels voiced concern over using the HUD affordable housing income threshold, saying it wasn’t specific enough to Harrisburg’s needs and wouldn’t target those who need it most.

“I feel like we are leveraging city resources, so it’s not unreasonable for us to come up with our own numbers,” she said.

However, Knight said getting Harrisburg-specific data could be challenging.

Other council concerns centered around enforcement of the requirements for developers in the program.

Papenfuse assured that participants would receive punishment for failing to comply.

“If a developer were to act in good faith to promise to build affordable housing and then not do it […] then we can revoke the certificate of occupancy for the project,” he said. “Then they’re not going to be able to rent any apartments at that complex.”

According to the proposed bill, they could also receive a fine of up to $1,000.

Council member Danielle Bowers said that the bills are still in the early stages of discussion and will undergo additional work and public comment.

“I would like to ensure this package is very full and robust,” she said.