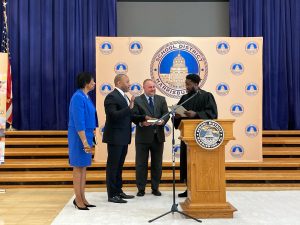 The new superintendent of the Harrisburg School District, Eric Turman, was sworn into office this week.

We’ve definitely made it to the dog days of summer here in Harrisburg. That’s also the theme of this month’s TheBurg Podcast, out now. If you liked our July magazine stories, the podcast digs even deeper into several of them. Subscribe wherever you get your podcasts, but first, catch up on the latest local news, listed and linked, below.

COVID-19 vaccines are being offered in the Harrisburg area at two upcoming clinics, our online story reported. On July 14 and 15, Harristown Enterprises will sponsor a clinic inside of Strawberry Square, and Central Penn College will hold one on July 16 and again on Aug. 6.

Eric Turman was sworn in as the new superintendent of the Harrisburg School District this week, our online story reported. Turman was the former principal of Reading High School before starting his position with Harrisburg on July 1.

Gun violence awareness will take center stage at an event at Italian Lake Park this weekend, our online story reported. A Harrisburg mother planned the event to honor those affected by gun violence in the community.

H*MAC’s former owners were awarded millions in a defamation lawsuit, our reporting found. Judge John McNally awarded them about $4.7 million in combined damages, ruling that they were defamed in online comments.

Harrisburg City Council approved two development projects, including a community of tiny homes for veterans on S. Front Street and a mixed-use office and apartment building on N. Cameron Street. For more information on other approved resolutions, read our online story.

Harrisburg City Council’s finance chair, Ben Allatt, voiced concern over a proposed debt repayment plan, our reporting found. He and council President Wanda Williams say the city can settle its debt with cash on hand, rather than through a proposed refinancing.

Levi Fetterman has touched the hearts of many of his Twitter followers, even without opposable thumbs. Our magazine article tells the story of the lovable pup who was rescued by Giselle Fetterman, the second lady of Pennsylvania, and her husband John Fetterman, lieutenant governor.

Low-end real estate in Harrisburg attracts buyers from all over the country. In his column, our editor reflects on why this happens and the impact it has on residents of the city.

Murals are coming to Allison Hill and Steelton as part of the 2021 Harrisburg Mural Fest, our online story reported. Sprocket Mural Works will paint murals at the new Recycle Bicycle location in Harrisburg and at Mid Penn Bank in Steelton.

Sara Bozich highlights live music events in the Harrisburg area this weekend. Take a look at her Weekend Roundup, here.