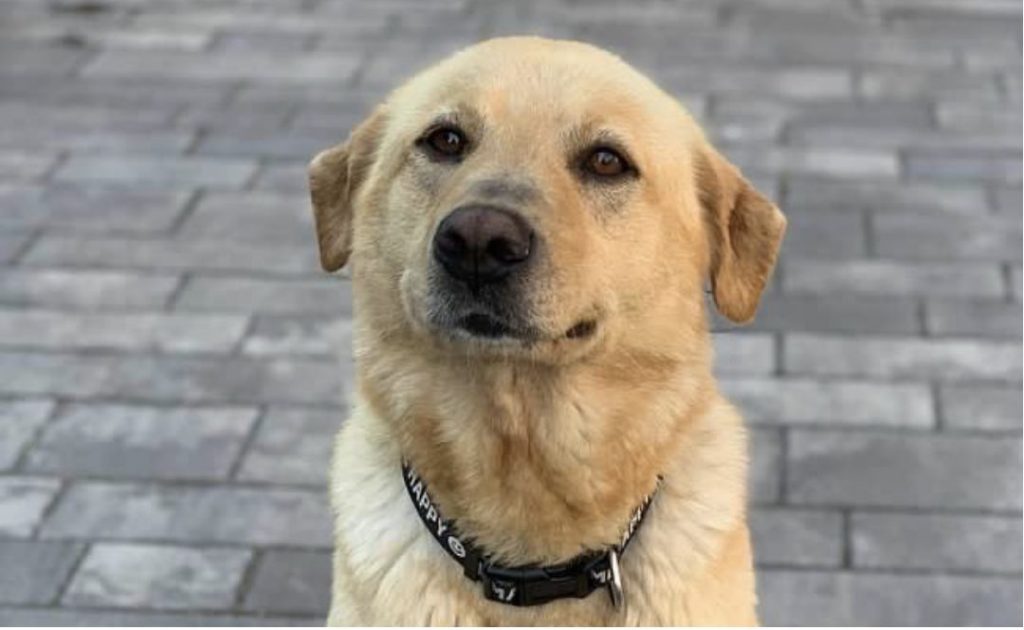 So how did Levi, a dog rescued from a West Virginia pen (where signs warned trespassers they ran the risk of being shot and killed), attain his canine celebrity status?

Like the happiest dog rescue tales, love—and a little luck—were at play.

“I came to that day—my heart was ready to adopt again,” said Gisele Fetterman, second lady of Pennsylvania. Her husband John Fetterman serves as lieutenant governor.

After grieving the loss of her previous dog, Gisele told a friend that she was ready and the next day was connected to a Pittsburgh-area organization that had just rescued Levi. His story melted her heart.

“The idea of your whole life spent on a chain—I felt an immediate connection,” Gisele said.

That was last May, and like many homebound Americans, the Fetterman family of five welcomed the idea of a pet amid the pandemic.

In the beginning, Levi didn’t know how to lie down. He would fall asleep, standing up, and adorably topple over. Before long, he learned he had beds in nearly every room.

“He didn’t know how to play with toys, and now he has more toys than my kids,” said Gisele with a laugh. “He had nightmares the first few months. And he was very scared of brooms—he may have gotten hit with something like that—but we’ve overcome those things.”

It took Levi two months to realize water and food would always be available—he didn’t have to gobble it all down at once. The starved, 30-pound, feral-looking creature transformed into a healthy, 76-pound, golden-colored family dog. He’s a mix of about eight breeds including Lab.

“What overwhelms me is—I look at him, and he is just love,” Gisele said. “He knows how to love, and he was never taught that—it’s just who he is. It’s just so beautiful, I can’t understand it. He’s just a magical creature.”

So magical, in fact, that he’s become a Twitter celeb. So how did that happen?

Last fall, as John Fetterman was being interviewed for political pieces by national media outlets, Gisele posted a behind-the-scenes photo. It showed their home Zoom setup, with family life taking place around the edges of the perfect “set,” and there was Levi, in the middle of it all. If dogs can have funny expressions on their furry little faces, Levi certainly did. And the Twittersphere responded.

“I didn’t really have a plan. Levi had a look on his face, like a deer in headlights, and I thought it would be funny for him to comment,” said Ann.

It’s not her real name, but she wants to remain anonymous, behind Levi’s account.

“When I realized someone had created his Twitter account…I reached out,” Gisele said. “The person who runs it is wonderful. We’ve since become friends, and I certainly couldn’t manage his account as well as she does.”

Nearly every morning, he greets his adoring followers by saying “hiii.” One recent morning, it was, “hiiii good morning hiii wyd?” About 400 people liked it, and 53 people replied to tell Levi what they were doin’.

“Some of the goals we talk about are to create a safe, kind space on social media—it can feel so cruel and awful at times,” said Gisele. “We have people who say Levi makes them happy every day.”

Sometimes, Ann posts photos that Gisele has shared with her. Levi banters with fellow celeb pups like @TedCruzPoodle. He relentlessly begged for Gritty, the Flyers’ mascot, to say “hiiii” on Twitter. In early May, Gritty did just that, through a video pinned to the top of Levi’s account like a trophy.

Besides the Twitter fun, Levi has found a voice for advocacy, including current Senate and House bills designed to raise Pennsylvania’s dog license fees, in order to better fund the Bureau of Dog Law Enforcement and state dog wardens. He even made an appearance at the Capitol in June, Gisele by his side, at the “Be the Voice for PA Pups Rally.”

Most of his tweets are dedicated to his fellow rescue pups. The longest resident at the Pennsylvania SPCA, Max, was recently adopted thanks to Levi’s tweets. Now, Levi’s going to bat for another long-timer in search of a home, Pepe.

Ann creatively writes Levi’s messages in “dogspeak,” with references to belly rubs, snoozles and his soulmate—that’s Gisele. Through the eyes—and voice—of a dog, Ann sees the world differently.

“One of the lessons I’ve learned from Levi is Twitter maturity,” said Ann, also a dog lover and owner. “On my own Twitter account, there are certain issues and threads where I would want to reply and perhaps argue. But that’s not what a dog would do, or what Levi would do…. Dogs are so pure.”

There’s something about looking into a dog’s eyes. If you’re lucky, you see a reflection—a soulmate with unconditional love.

“When I moved to this country from a third-world country, as an undocumented immigrant, I felt disposed. I had to be invisible,” said Gisele. “I would see the waste, the retail waste, and I would see communities abandoned. I remember being shocked at how disposable everything felt here.”

That’s why she created several nonprofits that collect unused food for the hungry. And it led her to a greater question.

“How do I advocate for those who are devalued? That includes people, places, things and pets. That has become my mission—to show value in the devalued,” she said. “Levi was a devalued dog, as so many dogs in shelters are. People search for pure breeds like somehow that’s superior, just like people can see themselves as superior to someone who wasn’t born in this country, and, at the end of the day, no one is above anyone.”

“If Levi can make someone feel seen and heard and validated through his page, then we’ve surpassed any goals.”