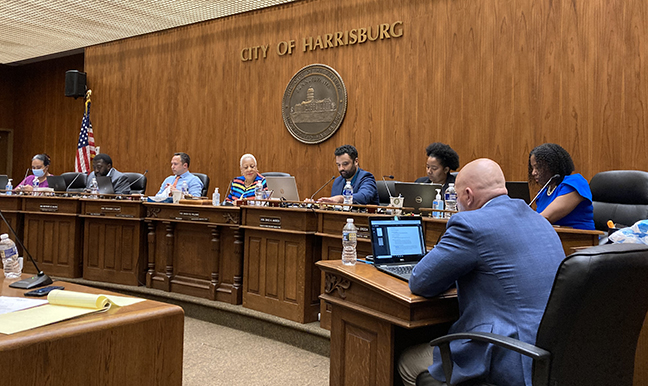 Two key Harrisburg City Council members have affirmed their support for paying off city debt with cash on hand,  thereby rejecting a planned bond refinancing advocated by the mayor.

At Tuesday’s legislative session, Council President Wanda Williams and Ben Allatt, chair of council’s budget and finance committee, said that they supported an alternative plan to use reserve funds to settle nearly $25 million in bond debt.

“It might be my parting exercise in my role as budget and finance chair to ensure that we can wipe this debt out and make sure the city remains on firm footing going forward,” said Allatt, who plans to retire from council in January.

According to Allatt, as of June 30, the city had a cash savings of $37 million, which, he said, could pay off the city’s debt and still leave a healthy reserve fund balance of $11.8 million.

The city also is slated to receive $48.8 million from the federal “American Rescue Plan Act.” Allatt said that some of those funds could be used to reimburse the city for qualified COVID-related expenses, which would free up additional money in the city’s budget.

Last week, Mayor Eric Papenfuse painted a sharply different picture, emphasizing the superiority of his plan to refinance most of Harrisburg’s existing bond debt at a lower interest rate.

The refinancing, he said, would save the city some $10 million in interest payments over the life of the bonds, most of which date back more than 20 years and that Harrisburg defaulted on during its financial crisis of a decade ago.

Allatt agreed that the refinancing would save the city money compared to the 6.75% interest rate it now pays on those bonds. However, he insisted that a better path forward is to pay off the debt all at once.

“We are in no way raiding the general fund in such a catastrophic way to be able to address this debt,” he said.

Reached by phone on Wednesday, Papenfuse, who was not at the council meeting, insisted that Harrisburg could not pay off its debt in full and retain a reasonable fund balance.

He said that the city’s current $37 million fund balance will decline substantially through the end of the year, given a pending $8 million bond payment, payroll costs and infrastructure repair.

“That figure is just a snapshot in time,” he said, of the current fund balance. “Without any context, it doesn’t tell you anything.”

He said that Harrisburg receives most of its tax revenue in the first half of the year and spends much of it down by year-end, which is his expectation this year.

Last week, Williams told TheBurg that she also supported paying off the debt using the city’s savings, a position she reiterated on Tuesday night. Williams also said previously that city Controller Charlie DeBrunner would make a presentation on the debt repayment plan at Tuesday’s meeting, but he did not do so.

Council members did not say when or exactly how they may move to pay off the debt. Tuesday’s meeting was the last one before their summer hiatus. City Council is not slated to return to session for about seven weeks.

This story has been updated to include comment from Mayor Eric Papenfuse.