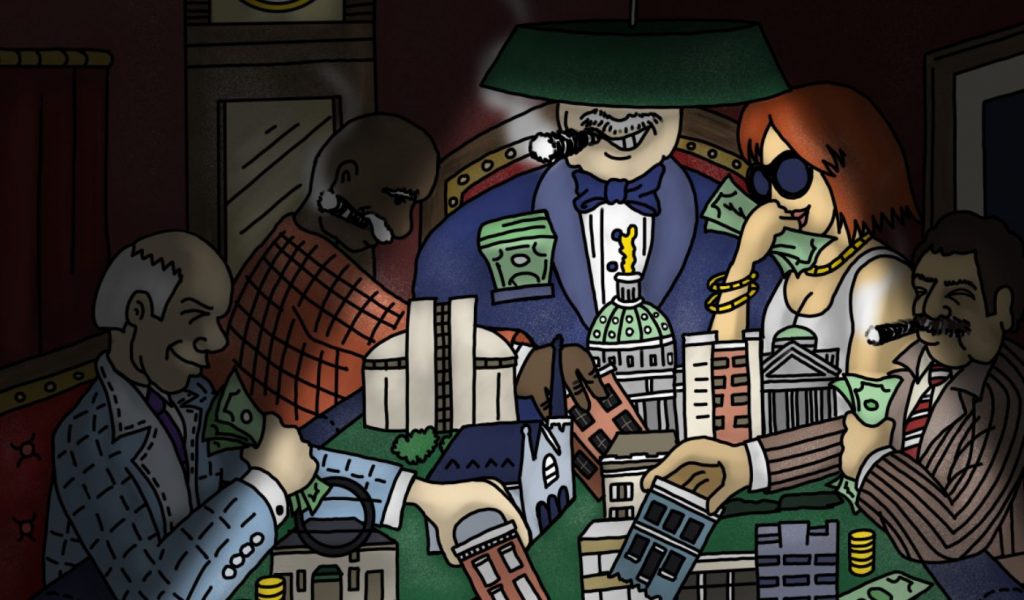 Capital Loss: Harrisburg’s low-end real estate attracts buyers from all over the country. But why?

There’s a woman who lives in southern California, and she recently bought a house in Uptown Harrisburg. And I wonder—what does she want from us?

Now, to clarify, I don’t believe she’s moving here, since Dauphin County lists her mailing address as outside of Santa Clarita, Calif. If she did, that would be wonderful and welcomed, another person discovering our great little city.

But I don’t think so.

From what I could find online, she’s never lived anywhere near here. She spent her early years in the South, a little time in the Midwest, and has lived in the Los Angeles area for many years, some 3,000 miles away.

In a way, I’m being facetious. After all, I think I know exactly what she wants from us: bucks, bills, dough—cold, hard cash.

She’s a rent-seeker in the classic economic sense. She bought a forlorn rental property in Harrisburg to extract value from a city she probably has never even stepped foot in.

Every month, I engage in a rather tedious, if enlightening task. For a couple of hours, I research recent property sales in the city of Harrisburg so that I can list them in our next issue, in the section that we call “Changing Hands.”

As I do that, I find that I play a little game in my head—I root for some sales and against others. Let me explain.

In my mind, I break home sales into three big buckets.

The first falls under the category of owner/occupant. I enjoy typing up those sales because it means that someone so wants to be part of this community that they’re willing to invest and settle here. Hooray for them—and us.

The second falls under the category of local owner/manager. These are rental properties bought by Harrisburg-area people and companies. The purchases can be good or bad, depending on the new owner. In this area, there are some fantastic landlords and management companies that care deeply about their properties and the people living in them. On the other hand, there are some terrible ones who neglect their properties and exploit their tenants.

The third category involves an outside owner—outside the region, often outside the state. I wince when I see these sales because I assume that these buyers want nothing to do with this city, other than to take money out of it. Some are individuals, some are management companies, and some are investment vehicles like IRAs, trusts and estates.

This past May, 216 properties sold in Harrisburg and, according to my calculation, only about one-quarter can be classified as owner-occupied. Unfortunately, people who live nowhere near here constituted a larger share of purchases—about a third.

But, honestly, can being an absentee landlord in Harrisburg be all that desirable?

Sure, I understand that slumlords often charge ridiculous rents for their squalid apartments—and property investors can enjoy some tax advantages. However, there also are huge costs associated with the endeavor, including mortgages, taxes, utilities, insurance and maintenance.

Absentee owners may save a few bucks from ignoring upkeep, but often they then can’t retain their tenants, who quickly move on. That means high transaction costs, lost rent and lots of time spent in court trying to claim back rent or enforce evictions. If you’re located outside the area, you’re also required to hire a local management firm, which will take another huge chunk out of your revenue.

I rented out a house for a few years and didn’t find being a landlord particularly rewarding or lucrative. And I was among the lucky ones, with good, stable, non-demanding tenants.

As for price appreciation—good luck with that. House values stagnated in Harrisburg for decades. Today, some properties—the nice ones—finally are rising in value, but you shouldn’t expect to profit much from selling your dumpy rental, especially after transaction costs.

In investment-speak, Harrisburg’s low-end real estate is a classic value trap—an asset that lures people in simply because it’s cheap, but then stays cheap.

Mr. Smith from L.A., Mrs. Jones from Brooklyn—heed my advice. Ignore the siren’s song of vast real estate riches oozing out of Harrisburg, Pa. Don’t listen to that person who, for whatever weird reason, advises you to buy a building in some distant city you’ve never heard of. If you’ve never been to a place, you probably shouldn’t be investing there, much less housing people.

If you do have some money to invest, there are plenty of options that don’t involve going into debt, high fees, legal entanglements, maintenance nightmares and the extremely sensitive business of providing shelter for other human beings.

Can I interest you in a nice stock index fund?