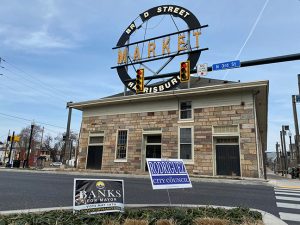 Political signs began to appear in Harrisburg as the mayor and City Council races started to take shape.

If you haven’t picked up our March issue of the magazine yet, get out in the sunshine and visit one of our many distribution locations. Of course, you can read it online too, but there’s nothing like a good old paper copy, agreed? Also, don’t miss our news coverage from this past week, listed and linked, below.

Bob’s Art Blog previews the annual “Art in the Wild” installation held at Wildwood Park. The process of coming up with and implementing a creative vision is no easy task, but artists always succeed in highlighting nature’s beauty.

In a Burg Blog, our editor commends the recent candidates running for political office in the city. He’s impressed, he said, with the recent level of civic engagement and thanks the candidates for being willing to serve.

Dauphin County is expected to receive up to $18 million in state and federal CARES Rent Relief Program funds that it plans to distribute to tenants behind on rent. Renters can possibly receive up to 12 months of rental and utility assistance, our online story reported.

Deco Grab & Go is a new café that recently opened in downtown Harrisburg. Our magazine article tells the story of owner Callie Alvanitakis and how she has managed her businesses during the pandemic.

Floyd Stokes, founder of the American Literacy Corporation, has been busy providing educational experiences for kids virtually during the pandemic. Since the beginning of October, the ALC has streamed book readings, which they plan to continue for a whole year, our online story reported.

Hamilton Health Center in Harrisburg has vaccinated 1,000 seniors this week through a partnership with Capital BlueCross and Rite Aid. Many of the community members reached were people of color who were struggling to receive the vaccine elsewhere, our online story reported.

Harrisburg City Council approved land development plans to convert a vacant church into an apartment building and another to build a six-story apartment and retail building, along with four other projects, our online story reported.

Harrisburg Mayor Eric Papenfuse announced that he will run for a third term, our online story reported. In an interview, he said that he had unfinished business that he felt he needed to follow through to completion.

Harrisburg voters will have a large field of candidates to choose from this May, our reporting found. Six hopefuls have filed for the mayoral primary and another 13 residents have filed for City Council nominations.

Home sales in the Harrisburg area dropped a bit in February, but price appreciation was strong, our online story reported. The Greater Harrisburg Association of Realtors reported that home sales fell to 458 units last month compared to 500 units in February 2020 across its three-county coverage area.

Open Stage’s new show, “Everyman,” is now running virtually. According to our theater reviewer, it is a cutting-edge, loose rendering of a 15th century morality play, in which “Everyman” represents all humankind and their journeys to Judgment Day.

TheBurg Podcast focuses on the one-year anniversary of the pandemic in the United States this month. Several Burg writers share their experience working, grieving and adapting throughout the year. You can read their reflections in our magazine article, as well.

Sara Bozich’s Weekend Roundup has plenty of ideas for how to enjoy this warm weather weekend. Plus, if you’re looking for ways to celebrate St. Patrick’s day early, she’s got you covered.

Sprocket Mural Works announced that they are kicking off the 2021 Harrisburg Mural Festival by painting over 30 planters in the Allison Hill neighborhood. Sprocket is looking to hire artists from the city, our online story reported.

Whitaker Center reopened on a partial basis following a lengthy closure due to the pandemic, according to our online news story. The same story reports that, across the street, neighbor Strawberry Square will begin host a COVID-19 testing center beginning next week.