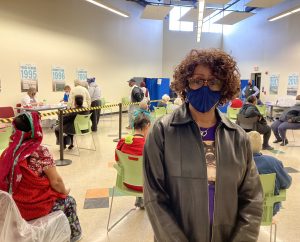 Lorraine Calien is one of the hundreds of seniors receiving the vaccine at Hamilton Health Center this week.

Lorraine Calien was hesitant to get the COVID-19 vaccine at first. Even as a board member of Hamilton Health Center, she had her concerns.

But after reading reports about the safety of the vaccine, Calien was convinced. Sitting in Hamilton Health’s community room on Wednesday, she had just received the shot, and it didn’t hurt at all, she said.

Starting this past Tuesday and extending through Friday, Hamilton Health Center is vaccinating 1,000 Harrisburg seniors in partnership with Capital BlueCross and Rite Aid. Many are people of color who haven’t been able to access vaccines elsewhere, Bradley Gebhart, director of development at Hamilton Health, said.

“It has been phenomenal to reach this amount of seniors in the community,” CEO of Hamilton Health Jeannine Peterson said. “This has given us an opportunity to meet the demand.”

Peterson said that Hamilton Health has been providing COVID-19 immunizations once per week to no more than 50 people at a time. This has included staff, healthcare workers and the elderly, so far. However, a lack of supply and limited staff and volunteers to administer the vaccine has made increasing the numbers hard.

Until Wednesday, Calien couldn’t find a location to receive the vaccine. She called at least four places before landing an appointment with Hamilton Health. She thinks there should be more locations in urban areas.

“It’s not always that people of color don’t want the vaccine,” she said. “They’re probably just having a hard time finding a place to get it.”

However, she said that she did understand people’s hesitation surrounding the vaccine, based on the Black community’s experience with historic healthcare injustices.

Peterson said that the turnout has shown that there is significant interest among the Black community. She added that lack of transportation or internet have been barriers for many people.

Senior patients of Hamilton Health and the general public were able to sign up for the vaccine. All slots for the week are filled. Vaccinations will continue at Hamilton Health Center through Thursday and will take place at Heinz-Menaker Senior Center on Friday.

On Wednesday, after a temperature check and registration, patients would receive the Pfizer shot and sit in a waiting area for 15 minutes to make sure they didn’t experience reactions. Each person would then be scheduled for a second dosage in three weeks, Gebhart said. Richard Jones, 74, didn’t want to get the vaccine, but he said that his doctor told him he should, so he did.

Volunteers like Lance Freeman, of the Harrisburg chapter of the Omega Psi Phi fraternity, were there to greet community members with a smiling face, even if it was under a mask.

A handful of members from his fraternity were volunteering on Wednesday and served with Hamilton Health before, assisting at a COVID-19 testing site.

Omega’s core principles—manhood, scholarship, perseverance and uplift—are all covered by volunteering with Hamilton Health, he said.

“It’s stepping up and doing what needs done for the community,” Freeman said.

Peterson said that volunteers are crucial if Hamilton Health is going to be able to increase the number of vaccines they can administer. For a community hit hard by the COVID-19 virus, the Black community, increased access to the vaccine could make a big difference.

Elizabeth Bass, 77, sat alone in the waiting area after receiving her shot. She told me about her six grandchildren and 12 great-grandkids that she was missing. She hadn’t seen them as regularly this year; they worried about her getting sick, she said. Bass was happy to get the vaccine, and she knew the kids would be happy too.

“This takes some of the worrying off my mind,” she said. “It makes me feel safer.”

For more information about Hamilton Health Center, visit their website.