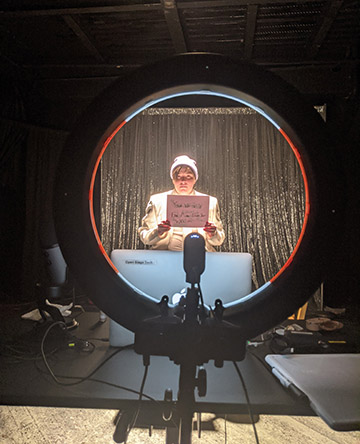 Open Stage’s “Everyman” is a cutting-edge, loose rendering of the 15th century morality play “The Somonyng of Everyman,” in which Everyman represents all humankind and their journeys to Judgment Day.

Decidedly more secular and restrained than its condemnatory inspiration, Open Stage’s play projects Everyman’s fear about the afterlife and unfolds as an allegorical examination told mostly through glib characters and playful scenarios.

Through the safe lens of social media platforms, we meet social media influencer Eman [Benny Benamati], who answers the doorbell when Death [Patrick Hughes] rings. The poignant symbolism of seeing Death through a literal lens also carries the figurative meaning of how we see Eman, how Eman sees themself, and how that lens will someday be turned introspectively.

After it sinks in for Eman that they are dead, (although we never find out the most interesting bit of how they died), Eman prepares for their final reckoning, with event logistics sent courtesy of a linked evite from Death.

Still clinging to earthly possessions and convenient relationships, Eman sets out on a panicky expedition to find someone to accompany them to the afterlife. After entreaties to their business manager (David Richwine), Sis (Liz Curtis) and ex-partner She/Her (Stacey Werner) are met with insulting rejection, Eman realizes, “I’m not the person I thought I was.” This is coupled with Eman’s realization that the people closest to them are on their own respective paths and won’t choose to be detoured.

It’s also telling that, in the limited pool of people they turn to in their final time of need, Eman’s ex-partner bubbles to the top as a choice. Kudos to Stacey Werner for delivering a brooding portrayal within a very funny set of scenarios, with smooth siren songs to cushion She/Her’s blow. (Original score by husband Nicholas Werner.)

Whoever wrote Everyman surely did not envision that his or her play would be told through social media. But as a storytelling device, the screened format and glimpses of random, filtered minutiae work for the type of life Eman lived.

When alive, Eman chooses which attention-seeking segments to share with their billions of subscribers. Then when facing the afterlife, we see the vulnerable Eman examining the more fulfilling path they abandoned before notoriety knocked. Eman arrives too late to the ironic realization that they took life for granted while telling others to live theirs. In consolation, Eman still takes away key life lessons about self-worth, trust, kindness, and sadly, regret.

Much like life itself, the play is loosely structured and mostly unscripted. Director Chris Gibson provided the actors with general plot points, character relationships and scenarios, and the actors used their improvisational skills to hang meat on the bones. The cast pulls this technique off effectively and mostly seamlessly.

Gibson and Benamati conceptualized and timed this play based on the one-year anniversary of the pandemic. Gibson said, “Quarantine has caused a lot of us to feel alone and isolated, and more than that—very, very mortal.”

I think Gibson summed up Open Stage’s rendition of “Everyman” best. “What could be a hotter take on 2021 than a 15th-century morality play?”

“Everyman” runs March 5 to 21, Fridays and Saturdays at 8 p.m. and Sundays at 3 p.m. through Open Stage’s online streaming program on YouTube and Facebook. Visit www.openstagehbg.com for details about pay-what-you-will tickets.