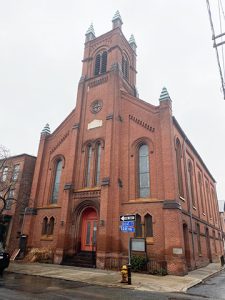 A few Harrisburg developers have cleared the final hurdle to begin their projects.

At a Tuesday night legislative session, City Council approved land development plans to convert a vacant church into an apartment building and another to build a six-story apartment and retail building, along with four other projects.

Developer Derek Dilks plans to transform the former First United Methodist Church at 260 Boas St. into an eight-unit apartment building. He received zoning relief for the $1.2 million project in January in order to change the use of the 140-year-old church building.

Also approved were a range of renovation projects that Dilks plans for downtown. These include:

With a unanimous vote, Harristown Development can also move forward on its project at 21 S. 2nd Street. The company plans to construct a six-story, mixed-use building with apartments, offices and first-floor retail space.

Harristown purchased the property in 2017, demolishing the blighted commercial building that then occupied the site.

Several more land development plans for new projects are slated to appear on the City Council agenda in the coming weeks, including the “Carpets and Draperies” building on N. 3rd St., a long-blighted retail building that will be repurposed as apartments.

Also coming to council is a large project in the block bounded by Boyd Street, N. 5th Street, Reily Street and Fulton Street, which will include 85 apartments, a grocery store and a parking garage.