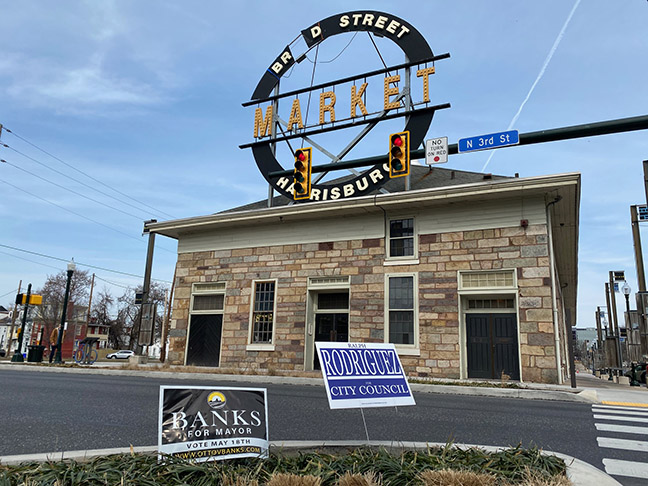 A few campaign signs have already sprung up in Harrisburg.

Harrisburg voters will have a large field of candidates to choose from this May, as six hopefuls have filed for the mayoral primary and another 13 residents have filed for City Council nominations.

Tuesday was the last day to file nominating petitions for the May 18 municipal primary. As of 5 p.m., the following candidates had filed to run for the Democratic nomination for mayor:

In addition, one candidate, Timothy Rowbottom, filed to run in the Republican primary.

“If you look at public participation, it’s greater than ever,” Papenfuse said on Tuesday as the filing deadline passed. “One of the strange positives of COVID is people engaging in public meetings. We have more comments, more interest in politics, and that’s good.”

Papenfuse, who has served two terms as mayor, pledged that this would be his final run for the office.

Despite saying he would run again, Lewis Butts, who has competed twice before for mayor, had not filed as a candidate by the end of day on Tuesday, according to Dauphin County.

Thirteen candidates have filed to run for the Democratic nomination for four, four-year seats on Harrisburg City Council. They are:

No one filed to run in the Republican primary.

Two of the four council seats are open as council Vice President Ben Allatt declined to run for re-election and President Wanda Williams, who has served on council since 2006, opted to run for mayor.

The Harrisburg school board race has fewer candidates this time than two years ago, when a dozen residents ran in the hotly contested race. This year, the Democratic candidates for four, four-year seats are:

In addition, the school board has one two-year seat available. Just one Democrat, Terricia Radcliff, has filed to run for that seat. No Republicans filed for the office.

For city controller, only incumbent Charlie DeBrunner, a Democrat, has filed to run in the primary.

Seven Democrats have filed for the District 12-2-04 seat primary:

On the county level, incumbent Matt Krupp of Harrisburg filed for re-election as a Republican for prothonotary. Anju Singh of Hummelstown is running for the Democratic nomination.

A two-year county controller seat is open following the election of Tim DeFoor as PA auditor general last year. Democrat Eric Epstein of Lower Paxton Township filed for the primary for that row office, as did Republican Mary Bateman of Lykens.

The municipal primary is slated for Tuesday, May 18.