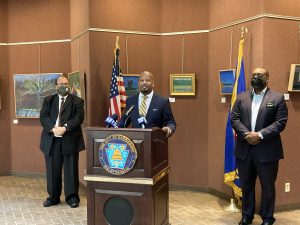 Harrisburg Mayor Eric Papenfuse will now work alongside a former political opponent, who will now serve as a top city official.

At a press conference on Monday, Papenfuse announced former U.S. Department of Housing and Urban Development official Otto Banks as the new director of economic development for Harrisburg.

Banks, a Harrisburg native, ran for the Democratic nomination for Harrisburg mayor against Papenfuse in the May primary election, often criticizing the mayor’s administration.

However, on Monday, Banks said that he has put the primary election results behind him and plans to work with Papenfuse to make improvements to the city.

“We were opponents,” Banks said. “There were some issues I felt like needed to be addressed, and the mayor and I spoke after the election, and we came to an agreement. The election is over, the opportunity is here. There is so much stuff that still needs to be done, and we are going to do this.”

Banks previously worked for HUD as the deputy assistant secretary for economic development, overseeing more than 800 employees and managing a $14 billion portfolio.

Papenfuse said that Banks’ relationship with HUD will benefit the city. Harrisburg’s Department of Building and Housing Development, which often works with HUD, falls under Banks’ purview.

Banks and Papenfuse explained that their goals for Banks’ position include creating a guaranteed income program for low-income residents, for which the mayor has proposed using federal American Rescue Plan funds.

Banks said that he also plans to work with the Harrisburg School District to develop after-school programming and partnerships, advocate for the proposed federal infrastructure bill and work with trade unions on job training.

“As unlikely as it [Banks’ hiring] may seem in the eyes of many, it made perfect sense for the mayor and I as we shared similar goals and ideals for the city of Harrisburg,” Banks said.

Banks denied that joining Papenfuse’s administration was a political move, but rather a move to assist the city he cares about.

“You know that old saying, ‘to whom much is given, much is required,’” Banks said. “I’ve done so well in my life. It is incumbent upon me to give back.”

Harrisburg City Council President Wanda Williams defeated both Papenfuse and Banks in the primary election, gaining the Democratic nomination. However, Papenfuse plans to announce on Wednesday whether he will launch a write-in campaign for the November general election.

When asked if his choice to hire Banks, a former political opponent, was done to benefit a possible campaign, Papenfuse did not directly answer the question.

Instead, he said, “I’m bringing in a former political opponent because I feel as a city, that’s what we need to do to overcome the divisions that hold us back. I’m also trying to acknowledge that I have failed up until this point to bring the community together in a way that brings about meaningful change.”

Although during his campaign, Papenfuse criticized Banks for formerly being a registered Republican, he now said that Bank’s bipartisanship experience will benefit Harrisburg. Banks is now a registered Democrat.

“I’ve always seen bipartisanship as a strength,” he said. “I think the single greatest accomplishment that we’ve had in the city over the past eight years was the extension of the city’s taxing authority […] that was done through partnership with Republicans on the hill.”

During his tenure, Papenfuse has had several directors of economic development, most recently Nona Watson, who resigned after the primary election. His annual salary will be $90,000.

“There is so much work to be done,” Banks said. “I’m essentially trying to create a renaissance.”