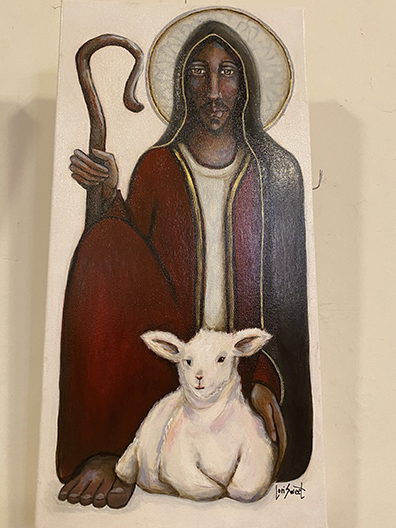 “The Healer” by Lori Sweet

Mention the word “spirituality” to a crowd of people, and, more than likely, no two responses will be the same. It would mean something different to everyone with a wide range of association and interpretations.

Currently, there are two distinct art exhibits in Harrisburg exploring thematic approaches. One is universal as it posits Christ depicted as a person of color. The other is a self-led journey addressing the “purification of knots”…the journey taken to attain that sense of one knowing the divine being. This Friday offers a great opportunity to view a spiritual slice of life different from those that traditional organized religion has offered. Both exhibits share a unique perspective and are available to view this 3rd in the Burg from 6 to 8 p.m.

“De-Colonizing Christ” at St. Stephen’s Riverfront Gallery opened last weekend, on Gallery Walk Sunday, featuring 32 works of art with Christ at its center, seen as a person of color. This exhibit is long overdue in dismantling the legacy of colonialism dating from the 15th century in portraying Jesus with fair skin and blond hair. In this new gallery exhibit, that myth is usurped with fresh and relevant renderings that bear investigation toward establishing social justice. This groundbreaking exhibit demonstrates the need for Christ to be experienced differently.

“The image of White Jesus reinforced a social system in which white Europeans occupied the upper tiers and indigenous people with darker skin ranked lower,” according to the exhibit brochure.

Such was not always the case. Dating back to the 3rd century CE, artists depicted Jesus as bearing their own identity, a sharp contrast to the 20th century homogenized portrayals as only white. 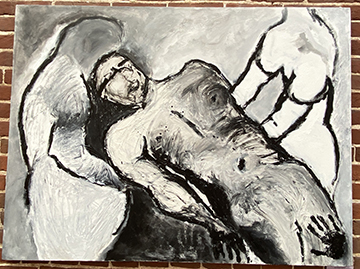 In its initial conception, Rev. Amy Welin and congregant Carrie Wissler-Thomas, CEO of the Art Association of Harrisburg, with an esteemed panel of judges, were selected for the purpose of creating a meaningful and moving exhibit of works by artists from all walks of life and backgrounds. This dramatic presentation was curated by Rev. Welin and Pastor Mack Granderson, under the keen eye and capable hands of Wissler-Thomas.

“There is such a breadth of works from iconic images to the abstract, the pious to pastoral, from artisinal creations to cutting edge technology,” said Rev. Welin. “There is truly something for everyone’s taste.” 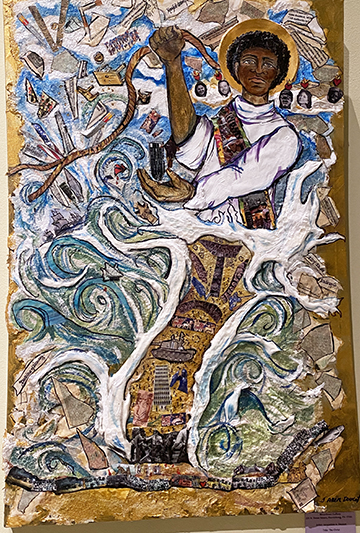 “The Christ” by Jacqueline Doucot

The exhibit is featured on the cloister walls and throughout the nave, culminating at the altar with two beatific works on either side of Ludmilla Pawlowska’s massive hanging cross from “Icons In Transformation.” This breathtaking pairing highlights Michael Reyes, a Franciscan monk from New York, in his gold leaf and oil on canvas, “On the Margins Of…” which depicts a brown-skinned “Madonna and Child.” Mary cradles the baby in her arms as the heavily textured painting is laden with colors reflecting the entire spectrum. It transports the viewer to a place in time revered by believers worldwide, cast in a different light. “The Christ,” by Jacqueline Doucot, is a mixed media work in collage, handmade paper and acrylic on canvas. In this work, Christ stands surrounded by the Tree of Life in illuminating shades of blue, green and cream, reflecting the rebirth of life in its abundant bounty.

This prestigious exhibit was comprised of jurors throughout central Pennsylvania, including Nathan Baxter, retired bishop of the Episcopal Diocese, as well as Ophelia Chambliss, artist and communications specialist. In addition, Nancy Mendes, artist, teacher and exhibit designer, joined Rachel O’Connor, curator at the Art Association of Harrisburg. Rounding out the panel were the aforementioned Pastor Granderson, director of the minority arts program, PA Council of the Arts, and Carlos Graupera, executive director of the Spanish American Civic Association in Lancaster. The judges awarded local artist, Lori Sweet, the “Bishop’s Award” for her painting, “The Healer.” The “People’s Choice” will be awarded in December by votes from viewers. The exhibit is on view through Dec. 19 on Sundays from 12 to 3 p.m. and 3rd in the Burg Friday nights, from 6 to 8 p.m.

For more information about Riverfront Gallery, visit their website.

“Purify” by Kelly Curran at Millworks 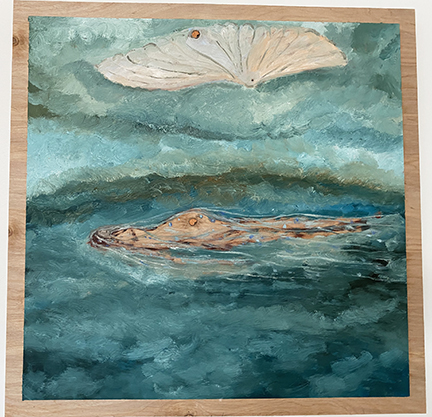 “The Pearl and the Womb” by Kelly Curran

Kelly Curran is not your typical artist. She is a searcher, a seeker and, as evidenced by her latest show, “Purify,” a wisdom keeper. Her one-woman exhibit opens Sept. 17 though Sept. 30 in the community room at Millworks downstairs and on the main lobby wall through Oct. 10.

Kelly’s paintings channel her Native American lineage through a series of paintings that speak to ancestral spirits, dreams and interpretations, as well as visions of future days. Think of the setting as a sweat lodge as tribal elders convene to prepare for a vision quest that will reveal all that has gone before and all that is yet to come. The “Purify” pantheon explores Curran’s dream state messages from elders sharing the meaning of “purify” as it speaks to her soul and reveals a deep dive from the artist herself about the purification of knots—knots both literal as knots within the wood slabs and also metaphorically as in the knots that hold us back.

Her vision quest became a personal path. “The purifying of the knots for me was going inside and discovering all that was there,” she shared.

“It was a journey back to my heart,” she said. “The paintings came from a very pure place. At times, it was as if I stepped aside and let the work be done through me as a creative door opened. In accepting the path (revealed), we allow the process to unfold and are left with a flaming light of our own true spirit, able to ‘burn the house down’ and rebuild on solid ground. ‘Purify’ is my journey over the past two years represented through my paintings”. 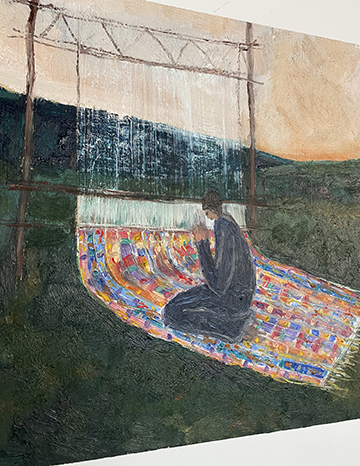 The body of work from the show creates an aura that emanates throughout the paintings, most in light shades and tones as if spirits from the past were guiding her on her quest. There is a lightness that shines from within, evidenced by the element of water filtering from above and below throughout, purifying the subjects portrayed. The central figures to the narrative walk between worlds, finding the veil and parting and passing through portals of time and place.

In sharp contrast to the ethereal works that form the majority of paintings is “Resurrection, Under Manganese Violet,” which required 14 tubes of paint, all applied layer upon layer along with fabric to achieve the rich depth of color and texture in this painting. The subject is surrounded by a blanket of flowers in all shades of purple, violet and lilac with touches of black and white. A halo of harmony and peace permeates her within the resting place in this world, then on to the next in an awakening. Kelly’s journey, which points to the heart, may be universal for the seeker in all of us. Everyone who shares in the visual experience of “Purify” will respond to it on a different level: physical, visceral, emotional and spiritual, especially those open to their own vision quest. True to her heritage, Kelly embodies the belief that everything in life is sacred, playing a vital role in our world. Her journey may help to set a moral compass that points to fairness, integrity and kindness–wisdom to live by.

For more information about the Millworks, visit their website.