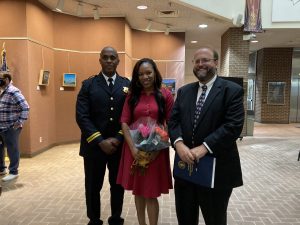 A key member of the Harrisburg Police Bureau was introduced on Wednesday, tasked with creating conversations and enhancing understanding between the bureau and residents.

“We are really pleased to be introducing Ana White,” Papenfuse said. “She really brings a wealth of knowledge around topics such as community policing, crisis management, public relations, strategic partnership and mental health.”

White’s position was previously held by Blake Lynch, who recently left the bureau after three years for a position with public media organization, WITF.

White graduated from Harrisburg High School. She earned a bachelor’s degree in educational studies and sociology from Denison University. She currently serves as the director of programming for Bro2Go, Inc., a youth and adult reentry intervention and prevention program.

According to Papenfuse, he and White developed a relationship over the past year, having spoken many times about police reform.

“Ana was one person who took the time to meet with me regularly,” he said. “We discussed ways that we thought we could work together.”

In her new role, White will oversee the six new community service aides (CSAs) hired by the bureau to build relationships with residents, as well as assist officers with quality-of-life issues.

White will report to Capt. Milo Hooper in the bureau’s community services division.

“I’m excited for the opportunity to engage with both law enforcement and citizens to work towards the necessary goals of creating and maintaining safe streets, while protecting and honoring our community,” White said.

White speaks both English and Spanish, which Papenfuse said will add to the city’s ongoing efforts of inclusion.

White also said that she plans to bring her mental health expertise to the table. Improving trauma-informed care in the bureau is one of her main goals.

In addition, she plans to focus on education within the community and the bureau. White said that she wants to improve communication with residents around resources they may need. She also hopes to implement more training for officers, specifically around cultural competency.

White has the bureau’s six new community service aides to assist her in her job of connecting with residents and helping out officers. Papenfuse also introduced them on Wednesday. 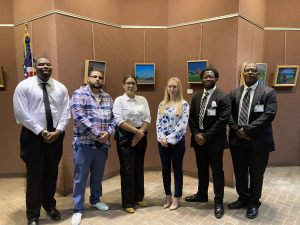 Four of the CSAs were born and raised in Harrisburg. VanSickler is from Dillsburg and Bowers is from Steelton, but now resides in Harrisburg.

Three of the CSAs have or are pursuing degrees in criminal justice. Others have experience working in the Harrisburg School District, and some were previously employed by the city in parking enforcement and in the parks and recreation department.

The police bureau is currently recruiting for a seventh open CSA position.

Hooper said that the CSAs have undergone hands-on training including ride-alongs, speaking with different departments and organizations in the city and attending events like National Night Out.

CSA Myron Brooks reflected on his first month with the bureau and his passion for the job.

Brooks said his experience having parents in the prison system was hard on him and affected his behavior, but when he learned he was going to become a father in 12th grade, he “shaped up.”

“Having those down moments helped propel me,” he said. “I wanted to come and give something back to the community.”

With all of the new additions to the department, Papenfuse said that he hopes to better unify the city and create conversations between the community and law enforcement.

“If there’s one thing I’ve learned this past year it’s that we live in a fractured community,” he said. “Through an honest exchange of emotions and feelings, we can come to reconciliation, and we can heal the trauma that holds us back as a city.”