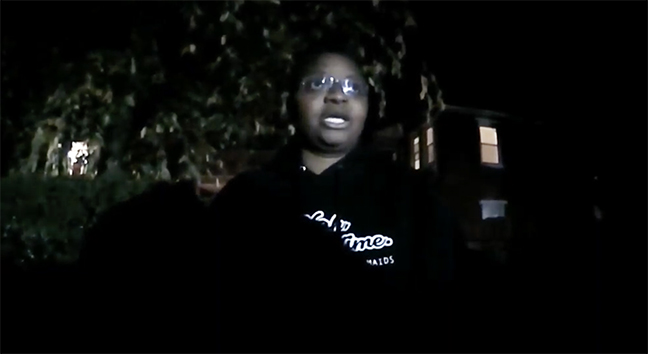 A screen image of Dr. Kimeka Campbell from the police bodycam footage

Harrisburg’s mayor on Tuesday night released bodycam footage of a confrontation between Harrisburg police and a city community activist, an incident that has resulted in a petition calling for the officer’s dismissal.

The 13-minute video starts with a police narrative of the Saturday evening incident at the Shipoke home of Dr. Kimeka Campbell, which began with officers responding to a noise complaint. It next shows the quickly escalating confrontation between Campbell and Officer Brandon Hoover and, later, other officers.

In the video, Hoover enters the backyard of the property at 11:38 p.m., saying he has received a noise complaint and, at first, the occupants agree to lower the noise. The situation rapidly escalates after Campbell confronts the officer, resulting in an increasingly heated disagreement over whether he is allowed to enter her property without her explicit permission.

“You don’t come into the gate until I give you permission to come through the gate,” she says.

“I have a right to come into the property because you were violating an ordinance,” he says.

As the confrontation grows heated, Hoover calls for backup. Several of Campbell friends then get between her and the officers, and one of the officers deploys pepper spray into the crowd as they move in to arrest Campbell on a charge of disorderly conduct.

Papenfuse released the video after the issue arose during the public comment period of Tuesday’s Harrisburg City Council meeting.

“I was so scared for Dr. Campbell’s life,” said resident Rachel Peacock in a comment to council on Tuesday. “I knew I had to get in between them. Hoover’s demeanor was full of malice, and then he maced me.”

Papenfuse, though, painted a different picture of the situation.

“The homeowner refused to identify herself and grew increasingly irate,” Papenfuse told council members. “At several points, the officer tried to de-escalate the situation. It grew increasingly hostile and profanity-laced.”

Earlier in the day, a petition began to circulate calling for Hoover to be fired, garnering more than 1,000 signatures by Tuesday night.

The petition states that Hoover illegally entered Campbell’s property without identifying himself in response to the noise complaint. The situation escalated, it states, when she asked him to leave her backyard.

“This incident has proven yet again that Black people are not safe from police violence in the City of Harrisburg,” the petition says. “We demand transparent oversight and accountability of the Harrisburg Bureau of Police and call on Mayor Papenfuse to immediately fire Officer Hoover.”

Papenfuse said that an officer responding to a citation, such as the noise complaint, must get a name and date of birth from the resident, which is what Hoover asked for and needed before he could leave.

Papenfuse said that Hoover called for backup, and the officers decided to arrest Campbell for disorderly conduct. According to Papenfuse, people who were at the scene were blocking the police from being able to arrest her.

However, Campbell, a co-founder of Harrisburg Young Professionals of Color, said that her friends were trying to de-escalate the situation themselves by standing between her and the officers.

“When I tell you he was so scary in the way he reacted to me telling him to get off my property,” Campbell said when reached by phone. “He asserted he had the right to be here.”

Papenfuse said the officer kept his composure the entire time.

“The fact that we have a petition circulating as well as numerous commentators calling for this young officer to be fired without people having actually seen the body camera footage is really disturbing,” he said. “This incident, which could have been easy addressed by cooperation, ended up wasting a lot of people’s time and energy.”

Council President Wanda Williams agreed with Papenfuse’s comments, while other council members declined to weigh in on the situation.

“We shouldn’t be providing editorial remarks,” council member Ausha Green said. “We should let the footage speak for itself.”