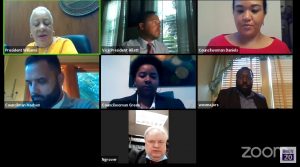 A proposed Harrisburg police advisory committee is inching closer to a final vote, after various amendments to the bill were passed by City Council on Tuesday night.

However, some community members think council is still missing a necessary change in language.

“We want a Harrisburg Community Review Board, not a Citizen’s Law Enforcement Advisory Committee,” one resident said. “Language matters. We demand an accountability structure.”

City Solicitor Neil Grover said that Harrisburg doesn’t have the authority to create a review board under state legislation.

“This not being enumerated anywhere,” he said. “There is no place to go to a state statute to say that this is an expressed authorization.”

Grover said the only written authorization the city could find was for advisory boards like the city’s existing Environmental Advisory Committee or municipal authorities such as Capital Region Water.

It could be called something else, Grover said, but he warned against doing that.

“I think calling it something else and claiming it’s more than an advisory board is unfair to the members that get appointed,” Grover said. “I think it misleads.”

Ultimately, council made no amendment to the name of the committee.

They did, however, vote on and pass several other amendments, including designating administrative subpoena power to the committee. Subpoena power was something that many community members asked for repeatedly at town hall meetings and council meetings.

In addition, the statement of general intent of the bill was amended to better communicate the board’s role in exercising accountability over the Harrisburg Police Bureau rather than serving as a liaison between the police and community.

Council member Ausha Green also proposed removing the police commissioner and the chair of council’s public safety committee as non-voting members of the board. They would be replaced with two voting members from the city at large. The nine committee members would serve three-year terms, she added. Both of these amendments passed.

Council voted in favor of requiring that all board members undergo orientation by the city’s law bureau within six months of their appointment. The bill previously required members to be trained at the city’s police academy and complete a police ride-along.

Among other amendments was one to encourage police compliance with requests from the advisory committee for information. If the police bureau doesn’t provide the information within 14 days of a request for information–or if the response is deemed unsatisfactory–the board can recommend that City Council suspend funding for hiring new officers.

Green said that the proposed bill will be discussed at the next council work session on Oct. 20 and will possibly face a vote on Oct. 27.

In other council action, members approved a zoning change for the area of the old Bishop McDevitt School on 2200 and 2300 Market St. The zoning map amendment, submitted by members of development group The Bridge Ecovillage, changes the property from an Institutional zoning designation to Commercial Neighborhood, which allows the developers to proceed with their plans for a mixed-use commercial/residential development.