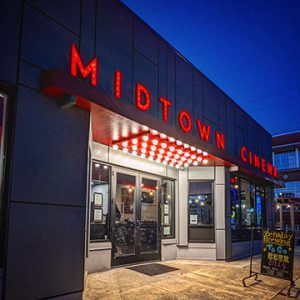 Midtown Cinema is celebrating its 20th anniversary on Nov. 28 with film screenings, a ribbon-cutting and a reception.

The cinema reopened to the public this past spring, having only offered private screenings for much of the pandemic.

“It’s been incredible to be open for first run films again,” says Rachel Landon, Midtown Cinema’s new general manager. “Patrons are excited to return and for many it’s their first trip back to see a movie in a theater in over a year and a half. Many patrons have been enjoying movies here since we first opened our doors. It’s truly humbling to know they’ve been with us since the beginning.”

The theater, which opened in 2001, looks a little different these days, having recently undergone renovations to modernize the space.

At their 20th anniversary celebration, the cinema will screen the three films that they showed during opening week in 2001. David Lynch’s “Mulholland Drive,” Julian Fellowes and Robert Altman’s “Gosford Park,” and Guillermo del Toro’s “The Devil’s Backbone” will be shown.

At 6 p.m., they will kick off the festivities with a mixer including cake, punch and offerings from Zeroday Brewing Co.’s Outpost bar, located inside the cinema. Their menu includes beer and gourmet hotdogs.

A ribbon-cutting will be held at 6:30 p.m. and the movie screenings will follow at 7 p.m.

This event is free for Midtown Cinema Members and admission is limited. Members have exclusive access until Nov. 22, when tickets will open to the public.

Midtown Cinema is requiring that all patrons either show proof of vaccination or proof of a negative COVID test before entering the theater. Masks are required for everyone, as well.

For more information, or to purchase tickets for Midtown Cinema’s 20th Anniversary Celebration, visit their website.