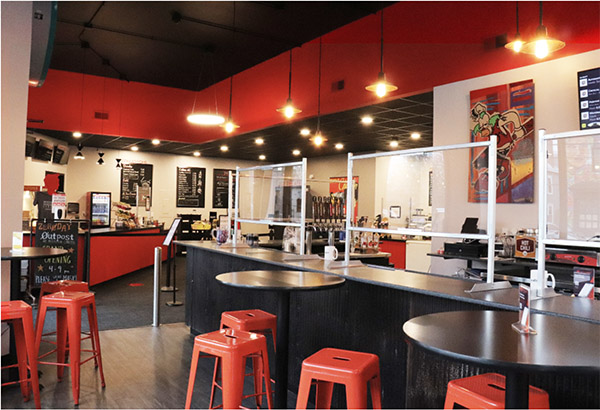 It has taken nearly a year, but renovations have finally come to a close at Midtown Cinema.

Back in February, Wohlsen Construction Co. began improvements to the building, with the goal of completion in June. The year 2020, though, had other plans.

“It was time to reimagine and reinvent ourselves for the comfort of our patrons,” said Stuart Landon, Midtown Cinema’s director of community engagement. “Although, I think we did a pretty good job infusing our Midtown Cinema culture into our new look.”

With designs by Richard Gribble of Camp Hill-based By Design Consultants, the new space features an expanded concessions area, a new Zeroday Brewing Co. outpost, an outdoor patio, new signage and new seating and soundproofing for the theaters.

“We’ve always aimed to offer our patrons an incredible experience that they can’t get at home or the megaplex,” added Adam Porter, director of operations. “[The renovation] shines the spotlight on why we think the moviegoing experience is so enjoyable and important.”

The cinema, owned by Lift Development, was initially going to remain open during the renovation, continuing limited screenings, but the coronavirus pandemic abruptly halted that plan. Both screenings and construction were stopped with the hope that the schedule would continue after two weeks, though those weeks quickly multiplied.

“Like many other arthouses, we took our programming virtual until we could reopen,” Porter said.

Many films were (and continue to be) offered on-demand through the cinema’s website, and staff hosted film discussions through Zoom to keep patrons engaged.

As for the prospect of re-opening in a COVID-consumed world, “our renovations really did work in our favor,” Landon said.

As the community went into lockdown, the team was able to revise the plans to ensure a safe and sanitized space, “with very few adaptations to our design,” according to Landon. One of these changes was the inclusion of HVAC bipolar ionization, which uses the latest technology to purify the air in each theater independently.

Now, as renovations have come to an end, the cinema has opened its doors for private screenings for groups of 10 people or fewer in an attempt to bring the joy of the movies back to the public while still being responsible in the face of COVID. The day for public screenings is somewhere in the future, Landon promises.

“I just don’t know the date yet,” he said. “Maybe sooner than we think.”

A visit to Midtown Cinema will reveal a smaller staff and a doubling down of cleaning procedures. You still can get popcorn, soda and more from the expanded concessions, though due to mask protocols, cinema staff asks that patrons wait to eat their concessions until they’re sitting in their designated theater. And, now, a trip to Midtown Cinema also includes a chance to drink beer from the new Zeroday Outpost located inside.

“Our partnership with Zeroday was the driving force behind the renovations,” said John Tierney, owner of Lift Development.

As Zeroday’s business has exploded in recent years, owner Theo Armstrong said that he is excited to take that partnership to another level. Zeroday has converted its old taproom, located just behind the cinema, into dedicated production space while it awaits the opening of a larger taproom on N. 3rd Street in early 2021,

“The Outpost at Midtown Cinema is a way for us to keep a retail presence in the Engleton neighborhood while offering Midtown Cinema’s patrons a more cohesive beer and film experience,” Armstrong said.

The new Outpost features a selection of beers that can be paired with food from the new gourmet hotdog bar in-house, or taken “to-go” and enjoyed in Midtown Cinema’s theaters.

The pandemic has left the question of how many more changes the community will have to endure before returning to normalcy, but the cinema staff has high hopes for the coming months.

“It’s hard to predict where the movie business will head next,” Porter said. “But we’ll continue to offer the engaging, important stories on our screens that our patrons love.”

Editor’s Note: Midtown Cinema is temporarily closed due to the governor’s most recent order on coronavirus restrictions.