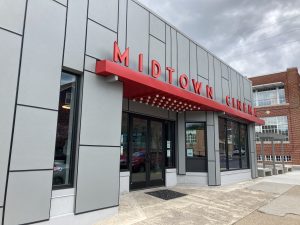 Midtown Cinema has an announcement that is sure to make your day—the big screen is back!

Harrisburg’s indie theater is again selling tickets after months of being closed for public screenings, due to the pandemic, and only booking private shows.

Landon said they made the decision to open this weekend, in order to show some of the Oscar-nominated films for this year—a tradition at the theater.

However, the cinema will still operate with limited availability and seating.

Shows will run starting Thursday evening and extend through Sunday afternoon. This weekend, the cinema is showing “Minari,” a movie about a Korean family that moves to Arkansas. They will also show a collection of Oscar-nominated short films.

Each of Midtown Cinema’s three theaters is restricted to 25% capacity. Landon encouraged people to pre-purchase tickets online in order to ensure they get a seat. Shows are already selling out fast, he said.

Since October 2020, Midtown Cinema has offered private screenings for families and groups of friends. Landon said they will continue to offer that, as well as online movie rentals.

The private screenings helped the theater remain open and allowed families to enjoy their favorite movies, but Landon looks forward to the return of the traditional cinema experience.

“The magic of movies comes from a group of strangers gathering in a darkened room to experience a movie for the first time,” he said.

Part of that experience, he acknowledged, are the concessions. Popcorn, candy—it’ll all be there for movie-goers, including drinks from Zeroday Brewing Co., which also features a gourmet hot dog bar.

Midtown Cinema has been renovating for months, as well. Landon said they are on the tail end. New seats fill two of the theaters and will be installed in the third by next week.

In addition to updates to the theater rooms, the lobby and exterior of the building were renovated, as well, giving the classic, retro theater a modern makeover.

Landon is excited to show off the improved theater to guests coming back for the first time.

“The big screen is back, and we can be together again,” he said.

Midtown Cinema is located at 250 Reily St., Harrisburg. For show times and to purchase tickets, visit their website.