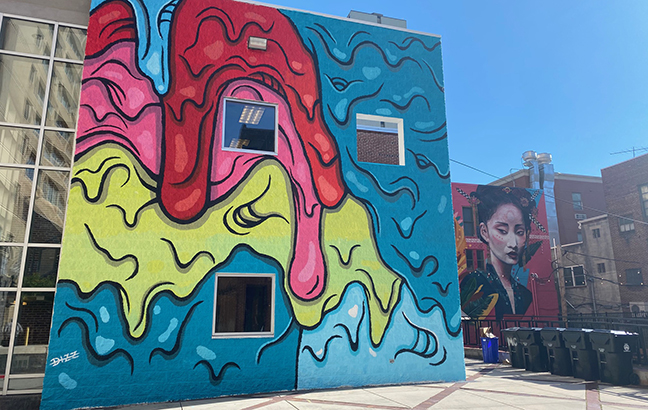 During these pandemic days, we all can use more color in our lives.

Fortunately, Harrisburg residents soon will have five new murals to help cheer them up even as the cold and dark of winter approaches.

The mural action started late last month, when artist Samantha Sanders brought bright colors and a beautiful landscape to a wall off of James Street, just behind N. 3rd Street, in a rear courtyard for the future home of Zeroday Brewing Co. 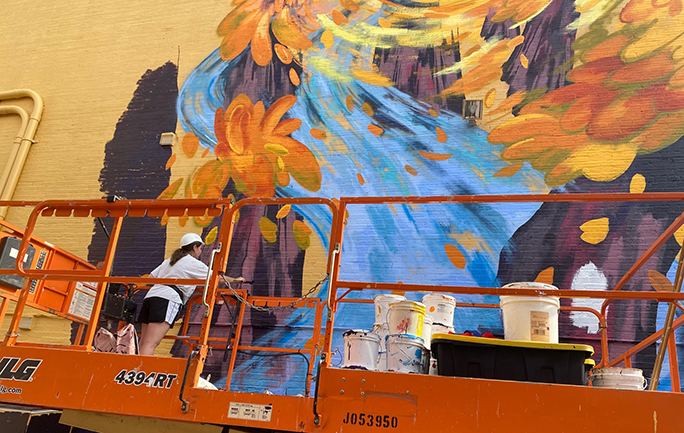 Artist Samantha Sanders last month at work on her mural.

The projects continued in early October when renowned Philadelphia-based muralist, Steve “ESPO” Powers, working with the arts group, Make Something, used inspiration from the community to paint a wall on the 1000-block of N. 3rd Street. 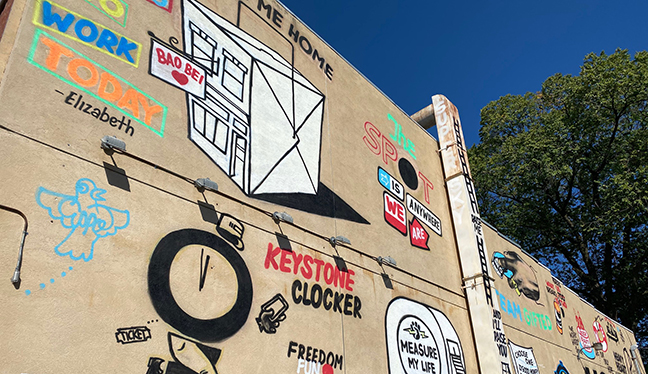 And, now, three more murals are going up downtown, under the auspices of Sprocket Mural Works and in collaboration with Harristown Enterprises and the Harrisburg Downtown Improvement District (HDID).

Those three murals are all along Blackberry and Dewberry streets, two alleys off of Market Street. They’re being painted by York-based artist Dizz Gavins, Gettysburg-based artist Emily Matusz and Harrisburg’s own Tara Chickey.

“We are extremely excited to have these three local artists add to the portfolio of work in our neighborhood,” said Todd Vander Woude, executive director of the HDID.

The murals by Sanders, Powers and Gavins are completed. Matusz began work on her mural last week, and Chickey will start her project this week, said Brad Jones, Harristown’s president and CEO.

“Our partnerships with the Downtown Improvement District and Sprocket Mural Works strengthen and beautify our community,” Jones said. “With the addition of these three murals, Blackberry Street will now become a central corridor for the mural trail.” 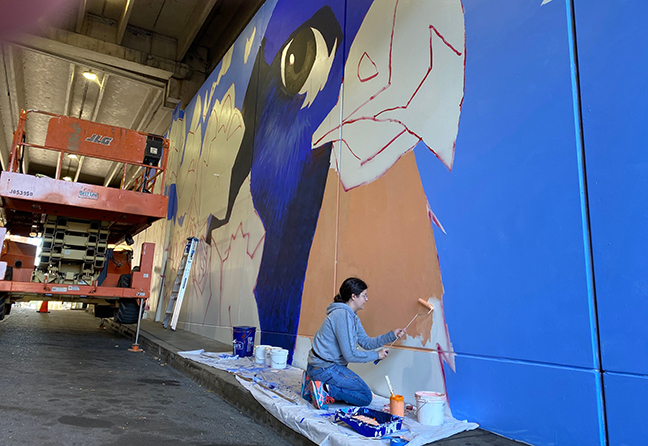 Artist Emily Matusz works on her mural on Blackberry Street beneath the Chestnut Street parking garage.

The McCormick Foundation has also contributed to some of the projects, Jones said.

Over the past few years, Sprocket has painted, commissioned and collaborated on some 85 mural projects in the greater Harrisburg area. This includes two, 10-day long mural festivals that resulted in dozens of works of new art throughout the city.

For more information about Sprocket Mural Works, visit their website.