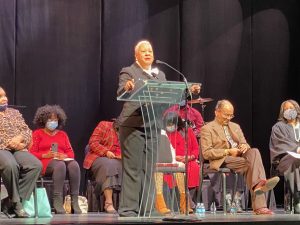 Mayor Wanda Williams addressed the crowd at her inaugural ceremony.

Harrisburg’s new Mayor Wanda Williams vowed to be an “authentic leader” as she officially took office on Monday morning.

At the swearing in, Williams explained her inauguration as a new beginning for Harrisburg. She noted that, while the election season was taxing as she battled challenger Papenfuse and lost both of her parents, she was ready to get to work.

“I hope today that I made [my parents] proud,” Williams said. “We are here today because we came together and said that it’s time for a new dawn in Harrisburg.”

Williams, a lifelong resident of Harrisburg, served on city council from 2006 through 2021, and as council president for her last two terms. 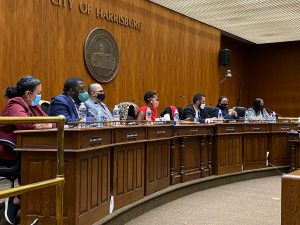 Assuming her new role, Williams noted that some of her priorities as mayor will include building affordable housing, creating youth programming, improving infrastructure and fixing the city’s outdated sewer and stormwater systems.

“Now is the time to turn away from politics and focus on the real work that we must do together,” she said. “As we begin our new dawn, we must get back to the basics. Good enough is not good enough anymore.”

Much of the inaugural ceremony centered around Williams’ Christian faith, with local pastors and musicians offering blessings, prayers and song.

Family members also participated. Williams’ grandchildren led the Pledge of Allegiance, and her husband Jerome Williams held the Bible as she was sworn in.

Additionally, a few of Williams’ supporters took to the microphone.

“Wanda has great experience, she’s learned a lot, and I think she’s got the knowledge and experience to lead our city,” said Harrisburg Treasurer Dan Miller. “I, for one, am excited about the change in leadership.”