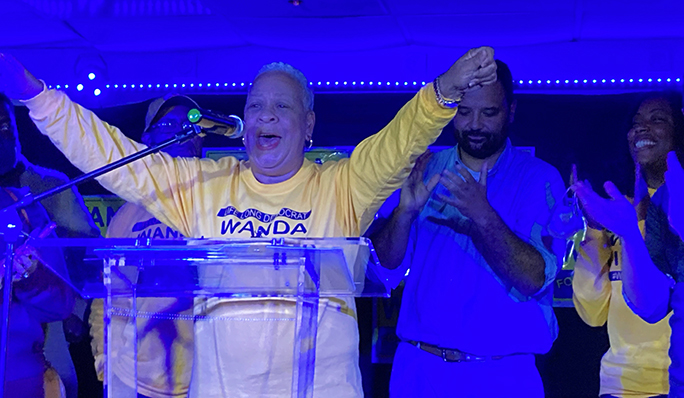 Wanda Williams will be the next mayor of Harrisburg, as the current City Council president handily beat back a write-in challenge from the incumbent mayor.

The vote tallies will need to be updated as the remainder of the mail-in ballots filter into the Dauphin County elections bureau.

At an election celebration in Uptown Harrisburg, Williams promised to be a “visible leader,” implicitly contrasting her style with that of Papenfuse.

“The residents of Harrisburg finally have an authentic leader, and that’s me,” she said, before a crowd of cheering supporters. “[A person] who’s rooted in the community and is going to take input from the community.”

Williams and Papenfuse also competed in May in a crowded, five-candidate Democratic primary, with Papenfuse losing the nomination for a third term by just 46 votes.

In mid-September, he declared that he would run as a write-in and has spent the past six weeks campaigning aggressively and trying to educate voters how to cast a write-in vote for him.

Williams, who has served on City Council for four terms, the last two as president, ran a comparatively low-key campaign. She will take office in early January.

In the meantime, she said that her first priorities are to hire staff, speak with city residents over how to best spend federal pandemic relief money and confer with City Council members.

“It feels wonderful,” Williams said, following her victory. “I want to get in there and get started.”

In the race for Harrisburg City Council, four Democrats won after running unopposed for four, four-year seats. They are council veterans Ausha Green and Shamaine Daniels and newcomers Ralph Rodriguez and Jocelyn Rawls.

In the hotly contested race for an open judgeship on the Court of Common Pleas, Republican Jeff Engle bested Democrat La Tasha Williams by a tally of 32,940 to 26,580 votes, respectively.

This story has been updated to reflect the final results in Harrisburg and Dauphin County.