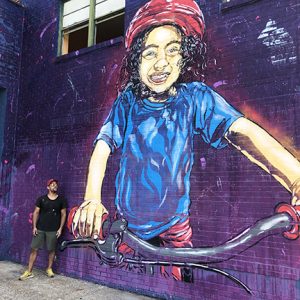 If you were too busy to keep up with local news this week because you were wet vacuuming your flooded basement or finding ways to beat the heat, we’ve got you covered. Find all of this week’s happenings listed and linked, below.

Andrew “Andy” Williams began a teaching position just weeks into the COVID-19 pandemic and had to learn to adjust quickly. In our magazine story, learn how Williams taught his music classes virtually and kept students engaged.

Blake Lynch, who served as a community relations director with the Harrisburg Police Bureau, will leave for a new job at WITF, our online story reported. Lynch served with the bureau for three years working to build relationships between community members and the officers.

Bob’s Art Blog highlights the shows of the summer. From the east to west shore, local art exhibits are heating up and Bob describes a few, here.

The Harrisburg Mural Festival continues as Sprocket Mural Works has projects planned for Penbrook and Steelton, our online story reported. See what other plans and completed projects are a part of this year’s festival.

Harrisburg’s population showed a small uptick in the newly released census data, our online story reported. Harrisburg city now has a total population of 50,099, up 1.1% from 49,528 recorded in the 2010 census.

Local economic leaders urge Pennsylvanians to get the COVID-19 vaccine and, in turn, help the economy. In their community comment, presidents of the Harrisburg Regional Chamber & CREDC and York County Economic Alliance talk about how receiving a vaccine may be the greatest demonstration of support to the economy and small businesses.

Markisha Peace, a teacher in the Harrisburg School District, was recognized as one of central Pennsylvania’s most impactful educators. In our magazine story, read about what makes her classroom special.

Midtown Cinema is featuring “Annette” during the month of August, a musical that combines romance, comedy and drama. Read more about what to expect, in our movie review.

Nyree’s Restaurant & Lounge has plans to open on N. 2nd Street in the former Bridges Social Club, our reporting found. The soul food restaurant, which already has a location in Camp Hill, will expand its menu to include shrimp and grits, chicken and waffles and alligator bites.

TheBurg Podcast features three stories of harmony in the arts world in this month’s episode. Dig deeper into three of our magazine stories starring poetry, music and murals.

Sara Bozich has ideas to make your weekend great. To check out what’s going on in the Harrisburg area this weekend, click here.

Sprocket Mural Works recently completed a mural on Recycle Bicycle’s new building in Allison Hill, our magazine story reported. The mural brings both organizations full circle on a partnership that started years ago.