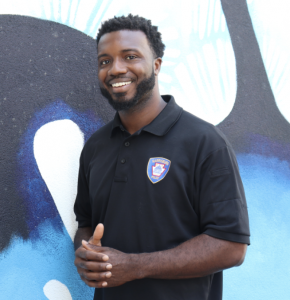 After several years of working to build a bridge between the Harrisburg Bureau of Police and the community, Blake Lynch will transition out of his position with the city.

On Monday, WITF announced that, on Aug. 30, Lynch will become the senior vice president and chief impact officer for the media organization, overseeing community engagement, fundraising, corporate sponsorship and marketing.

“As a kid, I was privileged to glean and learn from a lot of the educational programming that WITF put on,” Lynch said. “I’m really grateful and excited for this opportunity.”

Lynch served in the bureau for over three years, first as the community policing coordinator before recently being promoted to director of community relations and engagement. In his position, Lynch worked to build relationships between community members and the bureau. He also oversaw initiatives like National Night Out, food distribution with the Central Pennsylvania Food Bank during the pandemic and partnerships with the Harrisburg School District.

“It has been an honor to serve alongside our officers,” Lynch said. “We were able to really push forward community policing.”

A lifelong resident of central PA, Lynch served as the director of development for the Boys & Girls Club of Harrisburg before joining the police bureau.

With his recent promotion in the bureau, Lynch was responsible for overseeing and training the newly hired seven community service aides, civilian staff tasked with building relationships within the community.

According to police Commissioner Thomas Carter, the bureau expects to fill Lynch’s role.

“Blake would always go above and beyond what I would ask,” Carter said. “He is a very talented person. I’m going to miss him, but I’m happy for him.”

In his new position with WITF, Lynch said that he will oversee community engagement, fundraising, corporate sponsorship and marketing initiatives across the media organization’s 19 counties.

His work with the bureau, he said, helped prepare him for this role.

“We are thrilled to welcome Blake to the WITF team,” said WITF President and CEO Ron Hetrick in a statement. “Given his depth of experience in building community connections, fundraising for nonprofit organizations, and advocating for his neighbors, Blake is well-positioned to make a lasting, positive impact on our region. WITF looks forward to inspiring lifelong learning with him on board.”

Leaving the bureau wasn’t an easy decision, Lynch explained, but after consulting with his family, he decided it was the right move.

“I’m really going to miss the people—the residents and those who assist our city every day,” he said. “I’m grateful to have had the opportunity to work alongside them.”