Both sides of the Susquehanna River offer the final art shows of the summer season, as art emporiums recently were able to hold their first guest receptions in over a year and a half.

Part I – The East Shore

The Art Association of Harrisburg (AAH) opened its 93rd juried art show with a packed garden medley of patrons and art. 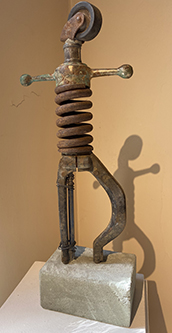 “The Dancer” by Sharon Pierce McCullough

CEO Carrie Wissler-Thomas and Curator Rachel O’Connor put on the finishing touches in the late afternoon before the party started. Lending a hand were gallery assistant Nate Foster and art instructor Crista Sanfilippo. Art provided the main course on both floors, and it was a gourmand’s dream with local fare filling the most hearty appetite in a very satisfying manner.

The art picnic provided ample sustenance from sculpture to searing surrealism. Eli Johnson’s oil on canvas, “I met God at Smithfield and Boulevard,” features the colors of the rainbow with crosses divinely orchestrated where religion intersects with art. Sharon Pierce McCullough’s freedom of spirit statuary is symbolic of solidarity in sync with grace as her totem, “The Dancer,” stops short of pirouetting. Being comprised of auto parts, found objects, wire, epoxy and concrete proves that movement is still attainable no matter how tied it is to reality. “Gratitude,” a black-and-white digital photo by Kim Love, captures within its frame a face of humility evoking emotion from the viewer while connecting with the human condition. The photo depicts a story of depth and deliverance all at once, told through a survivor, a soul that has come out the other side able to share as well as surrender. Jim Mackey, with his tribute to Joseph Beuys, used found objects of chalkboard, wood, foam, bones and paint pens, which combine to create an atypical amalgamation forming an equation of organic and manmade materials altering the balance.

Tina Berrier’s “Arrival #1 Oxaca,” an acrylic mixed media work, displays a shaman and acolytes dressed in vibrant, carnival attire. Symbolism carries through the animalistic and elaborate costumes to win the day as other worldly spirits abound. Pamela J. Black’s “Paper Thin” acrylic-on-canvas opts for a subdued palette of purples, blues and sea-washed aquamarine, offering a big wave crashing in pools of persuasion that compels the audience to recognize the power of water. Chet Davis’ “Anger,” an acrylic painting, plays it loose and fast, with a figure perhaps experiencing an out-of-body moment displaying a tempest of emotions, all delivered in colors that defy the range of rage that falls just short of meltdown. 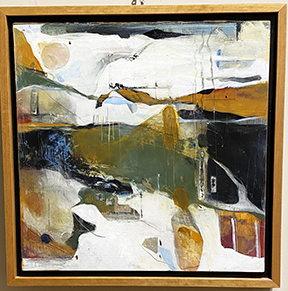 “The Walk” by Patricia Caulfield

Mixed media artist, Patricia Caulfield’s “The Walk,” an acrylic and collage painting, works with inky blue, golden browns and a creamy white. The colors and shapes converge to form a manifesto of meandering meaning brought into focus by inspired ideas one might formulate on a walk. The physical objects become opportunities for enlightenment. The gambol genuflects with a reverence for the beauty found in nature that stops short of elation in pondering the wonders of the world right before our eyes. “The Burning of Notre Dame” by Earle Rock

Michael Hower’s digital photo, “Strangers in the Night,” spotlights abandoned vehicles of transportation found in Johnstown, Pa., in his homage to art lost to time. Mary Kandray Gelenser’s fabric assemblage, “Hiding, Waiting, Transforming,” sheds light on fabrics gaining a second life as swatches meet creative stitching in her pastiche of patchwork for posterity. Earle Rock’s oil painting of “The Burning of Notre Dame” is a study in richness and depth of color that juxtaposes sky and water in tones that reflect the torrent above in the River Seine. Jessie Waite’s abstract painting, “Relocate,” demonstrates her art is constantly on the move, always marching onward. Color is key with mini-flags of demarcation in blue set against an orange background as shots of red pepper. Now step back a foot, and you will see a female form in repose. Peruse these works of art and so much more at the 93rd juried art show, open now for your viewing pleasure through Sept. 2 at the AAH, 21 N. Front St., Harrisburg.
Photos by Jana MacGinnes.

“Do you solemnly swear to tell the whole truth and nothing but the truth so help your artistic endeavors?” 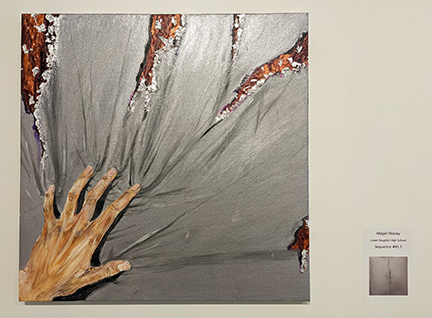 An image from “Half Truths” at the Susquehanna Art Museum

Art recently created and on view now through Aug. 22 at the Susquehanna Art Museum (SAM) is an exhibit related to “The Circle of Truth,” (49 paintings ending with Ed Ruschka) as student artists “riff” on individual interpretations of those major works presented from this show. An exhibit within an exhibit. A microcosm of a macrocosm. As part of the ongoing educational component that SAM offers, a baker’s dozen of student artists inspired by “The Circle Of…” present “Half-Truths,” a companion exhibit highlighting their “takes” on the original idea of artists building their personal presentation of “Truth” in visual form, based on a work sent by the preceding artist. Found in the Education Gallery, “Half Truths” shines a spotlight on the student paintings to reveal their vision as seen through the lens of license, albeit artistic, in lieu of poetic.

SAM’s Artistic Expressions Summer Academy recently took place in a weeklong intensive program designed for advanced art students from regional high schools who were recommended by their art teachers. Every year, the museum, located in Midtown Harrisburg, becomes the campus where students work with guest artists, explore multiple media and interpret artwork that is on view in the museum. This year, the 13 artists selected one of the 49 paintings from The Circle of Truth with their own 20-by-20-inch canvases. Each images title bears the sequential number of their inspiration painting, as if it could be placed into “The Circle of Truth.”

Across the river at the Carlisle Arts Learning Center (CALC), a riveting exhibition of photography and sculpture seeks to find middle ground and the space between as it hits the mother lode.

Self-taught, Enola-based photographer, Michael Hower and Shippensburg sculptor/professor, Steven Dolbin, offer a combined approach in their shared exhibit at CALC that opened this past Friday, Aug. 6 in the G.B. Stuart Gallery downstairs. Their “Left Behind” exhibit showcases the talents of both artists, one a gatekeeper for abandoned beauty in his love of places and things lost to time, the other a creator of tactile treasures made to withstand all eternity. For the next six weeks through Sept. 18 they cross paths at the intersection of yesterday and tomorrow found at 38 W. Pomfret St. in Carlisle. Over the years, CALC’s curator, Cathy Stone, has put together some insightful pairings and this latest duo hews to that tradition as she intertwines the large-scale sculptures of Steven Dolbin set against the storytelling photography of Michael Hower in this tour-de-force exhibit. True to her name, Cathy left no “stone” unturned by her artfully deft hands. 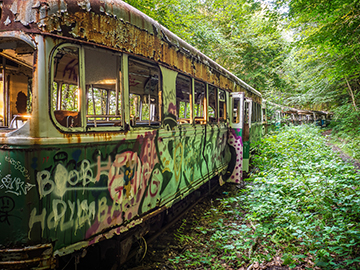 Michael Hower’s fascination with urban decay and the detritus of life finds him traveling to avenues of abandon-ness. Subjects long forgotten and destined to take on a patina of posthumous gravitas find new meaning in the discarded places that time has passed by. Hower’s pursuit of his own personal beauty focuses on the special segment of society surrendering to nature. He creates an audience appreciation attuned to painstaking detail in its photographic presentation. For this photographer, “Left Behind” is his tribute to time immemorial with spaces, places and objects overgrown by the environment. All that is left to decay and ruin becomes transformed under his gimlet eye, resulting in testaments with a deep resonance from amphitheaters to institutions, factories and transportation graveyards, now all in ruin where they once thrived in a metropolis of movement and magnificence. 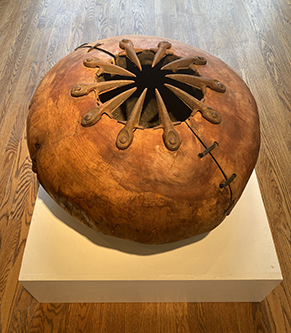 Author, professor, artist and visionary are terms that complement the many worlds that Steven Dolbin inhabits. He creates sculptures akin to an array of artifacts as if unearthed from an archaeological dig. Dolbin advances what nature has wrought and takes it to a higher level, where art meets science, somewhere in the heavens or buried into the Earth’s surface. His sculptures transcend fine art, lifting it to a higher plane if one can imagine objects hurtling like an asteroid through space and landing embedded, creating geological formations. The natural forms that Dolbin incorporates into his works allude to environmental concerns about climate change and the uncertainty of Earth’s future. To say that Prof. Dolbin’s sculptures are dramatic in their presentation would be an understatement. They command attention by size alone, arresting in articulating focus to the underlying themes of man’s role down through time as a hunter of game and fowl. His work, “No Accident: Death on the Asphalt Trail,” pays tribute to the deer of the woods, which makes for a sense of pragmatism that the pursuit of the hunter is necessary yet points to the ignoble killing of such magnanimous beasts. Tributes to the Native American philosophy of all creation bearing an eternal reverence for the sacrifice of life brings purpose to the on-going cycle of nature that is found in “Reliquary,” an outsized work of oiled, carved and carbonized sycamore wood and oxidized steel. In their designs, Hower and Dolbin skew closely to brethren disciplines, with both artists embracing the exploitation of nature in creating its own permutations. 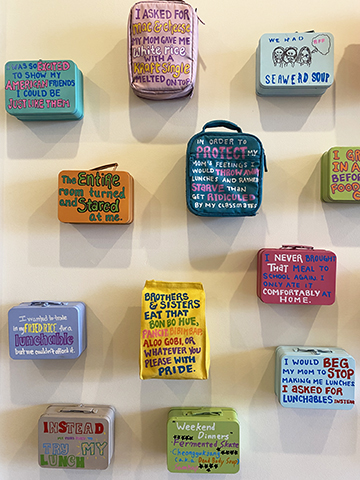 They say a picture is worth a thousand words, but what happens when the pictures and words combine to create an even more powerful statement? The CALC Collaborative “Cafeteria” opened for business this past Friday night, with artist Amie Bantz cooking up quite a tasty lunch as presented through her “Lunchbox Moments” exhibit. Growing up as a Korean American, peers often viewed her lunches in a different light altogether.

We all come into the world as a blank slate and are formed by what we see, hear and learn. No one in life starts out with a bias or rationale or an agenda in place. Learned behaviors and ideas create and formulate opinions, reactions and prejudices. Many are developed at a young age and are informed by parents and teachers, adults in general. These notions, both good and bad, shape us into the person we become and then influence future generations to come. At the heart of the exhibit, the artist makes a poignant point of the universal experience shared by all, the feeling of not belonging or fitting in. Amie illustrates this outsider role felt by Asian Americans through the exhibit’s nearly 100 lunch boxes. Narratives detail the range of hurtful moments, from peers at school criticizing culture’s food but also discussing physical features with words that cut deeply.

Bantz, in her latest project upstairs in the gallery, brings to light narrative selections of childhood memories. The artist showcases these painted on lunch boxes representing different experiences in school cafeterias, as to how Asian American, Pacific Islander and children from India are judged by their culture’s traditional meals eaten at school or in community settings. “Lunchbox Moments” is a collection of memories and experiences culled from stories and phrases contributed by members of various communities. The works are meant to expand our understanding of cultural differences and to educate others about the unique opportunities they bring, to open dialogue regarding those cultures, adding richness and depth through a universal language that mankind should embrace. Through the exhibit’s thought-provoking scope, Bantz hopes “to seek understanding, share stories and stop hate,” all worthy pursuits by an artist who desires to change world views for the betterment of all. The show runs through Sept. 18. Click here for a related story.