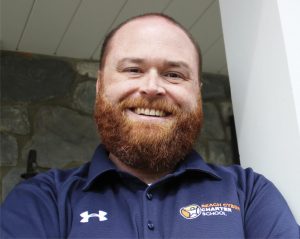 For most, starting a new job is seldom an easy process, but when Andrew “Andy” Williams began a teaching position last year, just weeks into the COVID-19 pandemic, he faced a set of unchartered challenges.

Williams, of Upper Allen Township, took on a position as K-12 music teacher at Reach Cyber Charter School in April 2020, just as Pennsylvania’s brick-and-mortar public schools shut down for the pandemic.

While Reach Cyber, based in Swatara Township, typically operates in a virtual environment, the pandemic mandate ruled out Williams being able to lead students in live musical performances, which he relished doing.

Under “normal” circumstances, he would have planned bi-monthly musical performances with student choir members at central locations throughout the state. However, COVID made such meetings impossible, not only for the remainder of the 2019-20 school year, but for the entire 2020-21 school term.

Soon after arriving at Reach Cyber, which teaches some 9,000 students around Pennsylvania and bordering areas, Williams began looking for an alternative.

Last November, he began working virtually with Reach student choir members, putting together what would be the school’s first musical performance videos, with little prior experience with video technology.

“I learned through a lot of trial and error,” Williams recounted. “I read up on it a lot before I got started.”

The hardest part, he said, was having a song’s audio track match the movement in a video.

“I have to make sure it’s all in tune and on time,” he said.

To participate, choir members submitted a video of themselves singing Williams’ selected musical piece solo and a cappella. He then blended students’ individual submissions into one performance with pre-recorded instrumental accompaniment and visual effects. The overall process took him up to 13 hours to complete, he said.

“Sometimes, I have a vision, and it takes a while to get there,” he said. “It’s up to the students whenever they want to submit (a recorded) song to me for a video.”

One of Williams’ first productions, “A Song of Peace,” featuring Reach K-5 vocalists, was posted on the school’s website last December to an overwhelming response. Videos also were distributed to Reach families and staff.

“This is so beautiful! I am so proud of my baby. Everyone did a great job. Mr. Williams did a great job putting this together,” parent Lynn Ortwein commented.

“So beautiful! I have tears running down my face! Thank you, Mr. Williams. Merry Christmas,” Jeannie Corby posted.

“Reaction to our videos has been big,” Williams said. “The national TikTok account even posted one of them online.”

Incoming Reach fifth-grader Abigail Watson is a member of the school’s elementary chorus who participated in the “Song of Peace” video. She joined the chorus last December, during her first year at Reach, because “I like to sing in Sunday school.”

“I was so proud to see her singing so beautifully,” she said.

According to Watson, Abigail practices singing her parts diligently before submitting them to Williams for compilation.

“She’ll work on the songs a lot because she just loves to sing,” Watson said. “Even when she’s just going into her room to get something, she’ll turn on the (musical accompaniment recording) and start singing.”

Williams said that he produces “one or two” performance videos of each chorus every two months. Performances are preceded by four rehearsals per song. So far, Abigail has participated in “four or five” of the videos and plans to continue during the upcoming school year.

“Mr. Williams puts a lot of love and energy into his videos,” Watson said.

You can watch “A Song of Peace” and other videos on the Reach Cyber Charter School Facebook page.