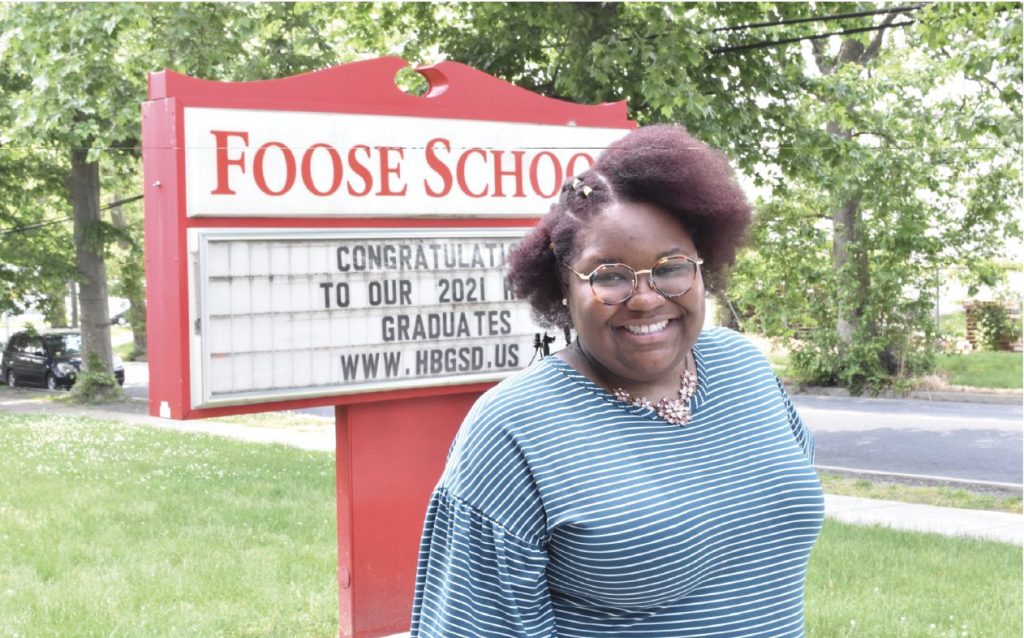 When Markisha Peace found out she had won an award recognizing her as one of 14 impactful educators in central Pennsylvania, she cried. But they weren’t tears of joy.

This past year was Peace’s second year of teaching fourth-grade students at Foose Elementary School in the Harrisburg School District. After graduating from Millersville University, Peace found herself with a job offer from Harrisburg, the district she grew up in. It wasn’t where she had seen herself teaching—in fact, she wasn’t looking to return to Harrisburg at all. But, Peace said, she now knows it’s exactly where she’s supposed to be.

When Peace received word that she was selected by WITF and the Rotary District 7390 as a winner of their 2021 Teacher Impact Awards, she doubted herself. She held only two years of experience, a small fraction compared to her seasoned colleagues, some who were teachers when she was still a student.

“I had to speak positivity to myself,” Peace said. “I’m working on helping my kids have those positive self-affirmations because, when I was a child, I feel as though if I practiced them more, I wouldn’t be struggling so much as an adult.”

In Ms. Peace’s classroom, it’s one where negative self-talk isn’t tolerated and positive affirmations are taught instead. It’s one where everyone feels included and welcomed—that’s her goal. Being in Peace’s class “just feels good,” said Foose Assistant Principal Michelle Archie, who nominated Peace for the Impact Award, something she’s never done for any teacher before.

“I love going to her class,” Archie said. “I always wanted to stay. You leave feeling like a better person.”

When the COVID-19 pandemic forced Foose Elementary to shut its doors early in 2020, as it did all schools in the Harrisburg district, Peace hadn’t even finished her first year as a teacher.

It was hard for her, she said—there wasn’t closure. But she knew it would be even harder for many of the kids.

“For a lot of them, coming to school is their safe haven,” she said. “I’ve definitely learned to maintain my resilience through this and to be strong, not just for myself but for my students.”

Peace sent cards to all of her students, and to this day, still keeps in touch with her first class. Once a month, she hosts movie nights for them. It’s important that all of her students feel valued, the way her teachers made her feel when she was a student.

“She says that she loves us like her own kids,” said Alexanderia, one of her past students in a video recording.

As a kid, Peace grew up in Uptown Harrisburg in a single-mother household. From a young age, she loved school. She loved learning in her classes and staying after school for extracurriculars. When she wasn’t in school, she was playing pretend school with her cousins or complaining about being home during the summer.

But Peace also experienced bullying during her time as a student, which caused her to doubt herself. At the same time, she struggled with having an absent father.

“I sought out a lot of my teachers for guidance, for support, for love, and they fell nothing short of providing that,” she said.

Just like Peace with her students, her own teachers are still involved in her life. In 2019, many of them threw Peace a first-year-of-teaching party to celebrate her accomplishments and journey ahead.

“It took my first year of teaching for me to realize that this is exactly where I need to be,” she said. “I’ve had moments where I reflect, and I actually get tears of joy knowing that it worked out, not how I wanted, but how it was supposed to.”

On the wall of Ms. Peace’s classroom hangs a body-length mirror with positive affirmations written around it.

When she sees students getting discouraged or doubting themselves, Peace will point them to the mirror to refocus.

“I’ll say, ‘go look at yourself in that mirror, talk to yourself the way you would talk to a friend,’” she said. “You wouldn’t say to a friend, ‘you can’t do this, you’re stupid.’ So, why would you say it to yourself?”

Her lessons on positivity have paid off, she said. She’s seen the way students have not only learned to be kind to themselves, but it’s impacted how they treat their peers.

During a virtual Zoom lesson one day, Peace called on a girl to read something aloud. The girl agreed, with a disclaimer that she had speech problems and didn’t like the way she sounded. Another student messaged the girl in the group chat saying, “your voice is beautiful; we love when you speak,” Peace said.

“They’ve completely taken the baton and ran with everything they’ve learned,” she said.

It’s all Peace could ask for—her students making strides toward loving themselves and each other. It’s something Foose Principal Will Hicks is happy to see, as well.

“She fits in extremely well with the culture of this school district,” Hicks said. “We are trying to build relationships with our kids. Everybody does that in our building, but Ms. Peace is phenomenal.”

Believing in herself the way that others do is still hard for Peace, but she’s come a long way since her days as a student. With each lesson she teaches her kids, she reminds herself, too.

“It’s an honor to know that people see in me what I sometimes struggle to see in myself,” she said. “I can help my kids heal and it’s kind of, in a way, healing for me, as well, because I go back to heal my younger self.”

This past year, Peace selected a class song for her students, an anthem for them. It was “I Believe” by DJ Khaled and Demi Lovato. When I later listened to it, I was struck by how perfect it fit with the atmosphere of her classroom. The pop artists may have sung it in a way that was catchy and hip, but it’s what Peace has been instilling in her kids all along.