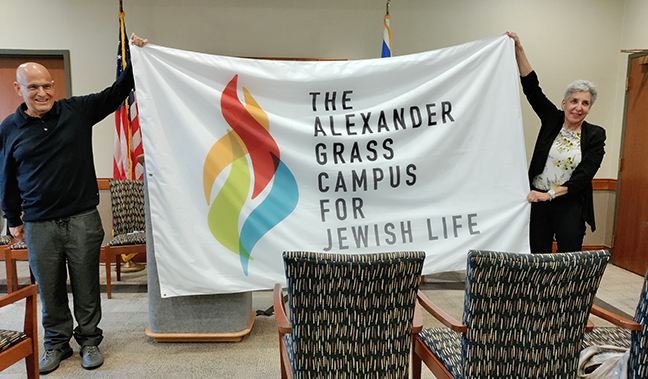 Roger Grass and Elizabeth Grass Weese hold up the flag that will fly over the Alexander Grass Campus for Jewish Life.

The new Alexander Grass Campus for Jewish Life offers space for community and people of all faiths, beliefs, and ideals to join forces for change, said speakers and supporters attending the flag-raising to dedicate the new home of the Jewish Federation of Greater Harrisburg.

The federation and affiliated organizations are moving to the former Dixon University Center at 2986 N. 2nd St., in Harrisburg’s Riverside neighborhood. The federation bought the site in April for $4.56 million from the Pennsylvania State System of Higher Education.

A gift from the Alexander Grass Foundation gave the federation the means to exit the overcrowded Jewish Community Center a few blocks north. The move “kind of brings everything full circle,” said Elizabeth Grass Weese, who agreed with her brother, Roger Grass, to make the gift.

“My brother, Roger, and I are honored to be here today to dedicate this beautiful space,” said Grass Weese, foundation president. “My father would have been proud to see the community coming together to support this amazing project, and I am thrilled to see how his legacy will live on through all the activities and programs brought to life on The Grass Campus.”

Growing up, Grass family life revolved around the JCC, said Roger Grass, who traveled from Israel for the occasion. In 1957, his father donated about $150 to the original JCC campaign in 1957 and pledged to do more if he ever had the means.

“We’ve been very lucky, very blessed,” Roger Grass said. “We learned from my mother (civic leader Lois Lehrman Grass), and my father, as they say in this new generation, you’ve got to pay it forward. You’ve got to give it back.”

On the six-acre campus, established around 1908 as the home of Harrisburg Academy, the administration building will now host meetings, federation staff and a 15,000-square-foot fitness center with river views.

Other federation uses now crammed into the previous JCC will have dedicated buildings, including the Brenner Family Early Learning Center and a senior wellness center. Duncan Hall, across 2nd Street from the main campus, will house a gymatorium, lap pool, and Silver Academy, Harrisburg’s Jewish day school. The federation-affiliated Jewish Family Services will occupy the former chancellor’s house.

“My mother was born and raised here,” Grass Weese said after the ceremony concluded with her and her brother holding up the campus flag. “My father loved it here. We’re so thrilled this is for all the community. That was important to us. For as long as Harrisburg is here, our hearts will always be here.” 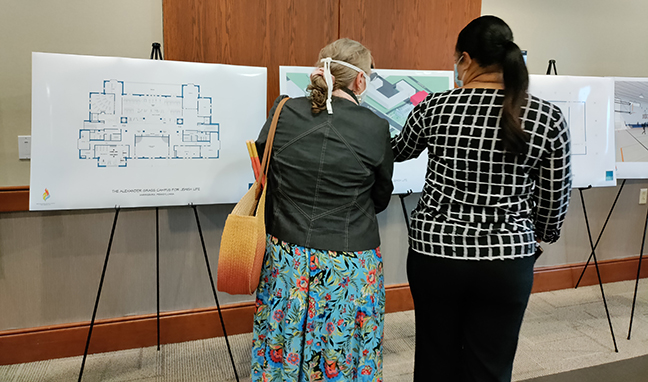 The Grass siblings’ decision to support the project is a tribute to their “incredibly generous” father, said Ron Muroff, rabbi of nearby Chisuk Emuna Congregation. The new space should allow joint programming between his synagogue and the JCC to grow, and the campus could be a platform for promoting Jewish values, he said.

“I would hope that we together, Jews and non-Jews alike, can really draw from the traditions, histories, values of Jewish history and Jewish life to promote justice, to promote joy, to promote support for the Jewish community and way beyond,” he said before the ceremony.

In the audience, Carol and Joel Ressler saw a sense of unity in the presence of rabbis representing multiple area congregations.

“This is what community is,” said Carol Ressler. “So many of us, between our family and our friends and our shul, we don’t have this endless opportunity to come together in the excitement of community, and this allows that.”

The campus “promises to be a blessing for the entire community,” said Dauphin County Commissioner Mike Pries, reading from a commissioners’ proclamation. The array of counseling, food, adoption, and other services “will be offered to all, regardless of religious affiliations,” he said. 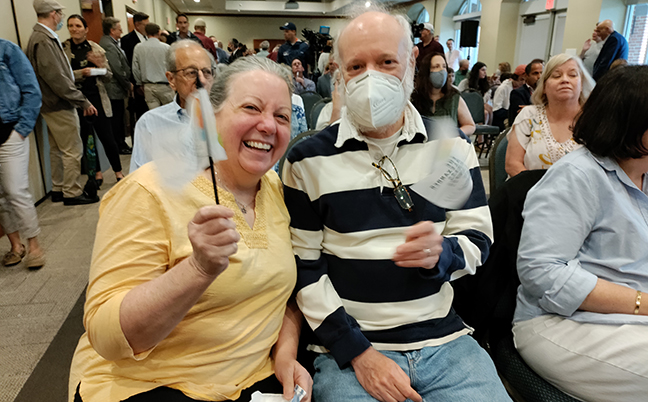 Matt Maisel, communications director for the City of Harrisburg, said that he grew up at the JCC. Presenting on behalf of Mayor Wanda Williams, who is out of town, he noted that the “diverse melting pot” convening around the JCC is all-inclusive. The federation’s move away from the Harrisburg-Susquehanna Township line and squarely into the city synchronizes with one of the most diverse cities in the United States, he said.

It’s bashert, Yiddish for destiny or “meant to be,” Maisel said.

“It’s so representative of the city of Harrisburg,” he told TheBurg after the ceremony. “Being a community center for the city, we’ll both be able to do great things together.”

The diversity, strength and shared values represented by the audience are “what holds us together as a community,” said state Sen. John DiSanto. “This is going to be an anchor, and it’s going to be growth for a solid community that’s doing good work not only here in Harrisburg but around the world.”

The campus will be “a great neighbor,” said state Rep. Patty Kim, noting the federation’s history of welcoming the community, from political forums to her children attending JCC day camps. She changed up a biblical saying, “Whoever is faithful in the little things will be faithful in the larger ones.”

“Whoever is faithful in the little buildings will be faithful in the big ones,” she said. “I know that as you open your doors to everyone in the community, you will continue that legacy.”

The campus is “everybody’s campus” and a community hub grounded in Jewish values that are also universal, said federation Board Chair Abby Smith.

“This is not about a bunch of organizations moving south along the river,” she said. “This is really about a moment to take what is one of the most beautiful properties I’ve ever seen and really make it shine, and to take this moment to dedicate this campus, standing on those who have come before us on their shoulders, but very much knowing that the best is yet to come.”

For more information about the Jewish Federation of Greater Harrisburg, visit their website.