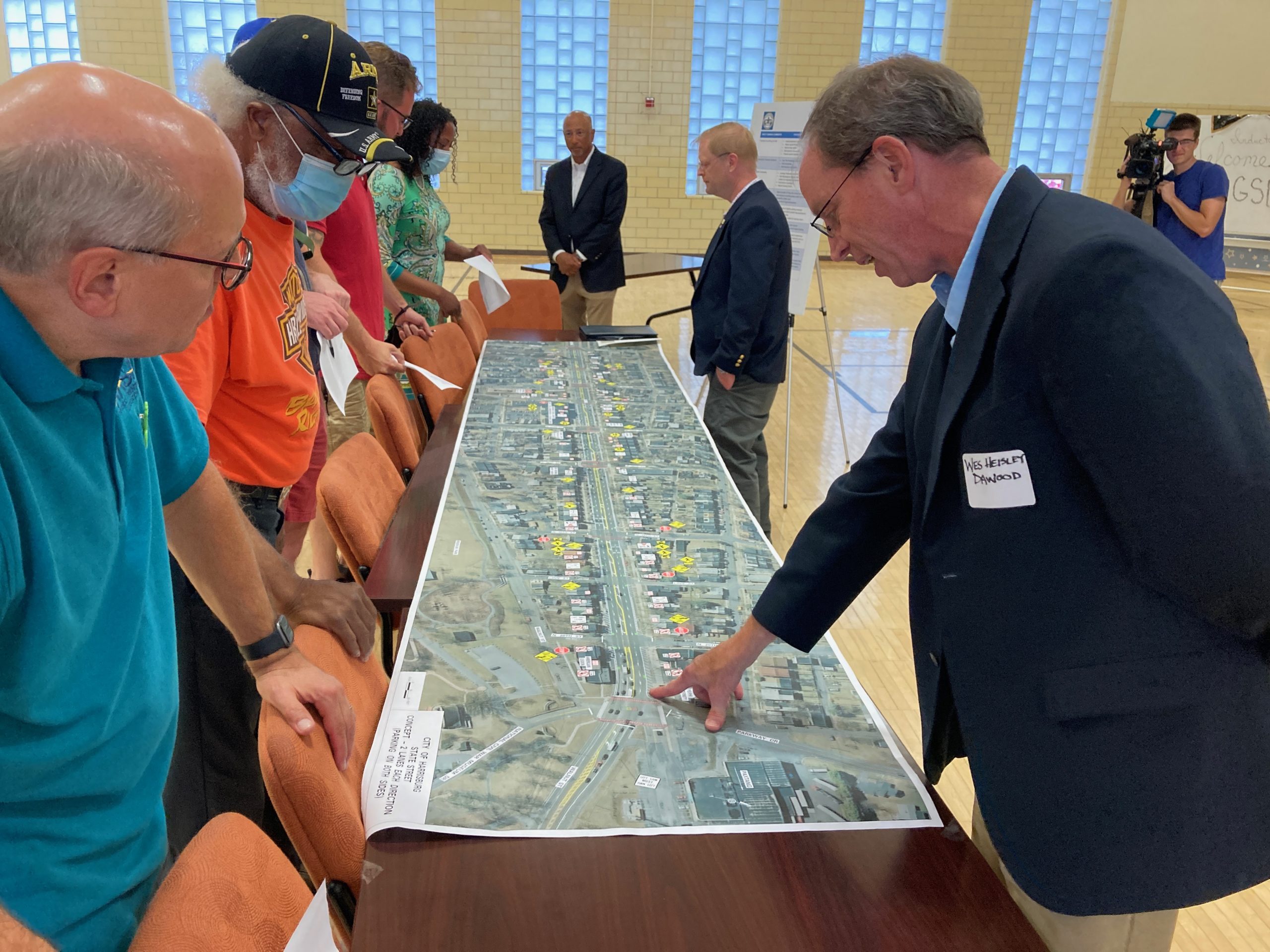 Representatives from Dawood Engineering Inc. explain the updated proposal for State Street at a public meeting on Wednesday.

A project to make State Street in Allison Hill safer is moving closer to the design finish line.

At the last of three public meetings held by Harrisburg this month, residents on Wednesday shared their opinions on a final proposed design for the roadway.

“At the end of the day, State Street is going to be safer,” said Matt Maisel, communications director for the city. “The outreach from the public really speaks to how pleased we are that they stepped up to the plate.”

The State Street Rapid Response project began in 2019 with the goal of making the corridor safer for pedestrians and motorists. Construction began in April, but was halted not long after when residents expressed concern over aspects of the plan that would decrease parking and add a bike lane to the road. In late April, the city issued a cease and desist order for the construction and began to review the plans.

Since then, Harrisburg has held three public meetings and accepted public comments online. In total, the city received around 100 comments, Maisel said.

On Wednesday in the Harrisburg School District Administration Building, representatives from Dawood Engineering Inc., which provides services to the city, shared an updated proposal.

“We listened to all the comments we got from the community,” said Scott Bechard, senior transportation planner at Dawood Engineering. “We are doing what we can to improve safety along this corridor.”

The updated proposal includes narrowing the current 12-foot-wide traffic lanes to about 11 feet in width. All current legal parking areas will be maintained, and parking spaces will be marked. Additionally, the plan adds a 3-foot buffer between the outside traffic lanes and parking to allow for motorists to safely open their car doors, Bechard explained.

State Street resident Nicole Boyd was happy to see that parking will remain intact, but still feels nervous crossing a road with so many lanes, she said. However, she was satisfied overall.

“Compared to what the original proposal was, it’s good,” Boyd. “I didn’t think they would really make changes, so I’m happy.”

While the initial plan for State Street included designated bike lanes, many State Street residents spoke in opposition to them, saying the lanes would go unused. The updated proposal instead utilizes “sharrows,” markings to signify that the lane is shared by cars and bicycles.

For Harrisburg resident and bicyclist Brandon Basom, that’s not enough. He was happy to see the improvements to signage and crosswalks, but didn’t think enough was being done to accommodate those who travel by bike.

“Telling people to be careful never saves lives,” he said of the proposed “sharrows.” “It’s sad and frustrating. It’s almost like half of the city doesn’t matter.”

According to Basom, who volunteers at Recycle Bicycle in Allison Hill, which provides free bikes to residents, the organization gives out thousands of bikes a year.

“These are people who need to ride their bikes,” he said. “Some can’t afford a car or don’t have a license.”

While some residents, like Basom, still don’t feel their concerns were addressed, others felt adequately heard by the city.

Evelyn Hunt, a long-time State Street resident, was one of the first to initially express dissatisfaction with the project back in April. While there were still a few tweaks she hopes engineers will make, she seemed to be pleased overall with how things turned out.

“I feel better about parking,” she said. “My voice was heard by the city and the engineers, just not by PennDOT.”

According to Wes Heisley of Dawood, engineers will make adjustments based on comments from the final public meeting before presenting the plan to PennDOT, which owns State Street, for approval. The plan will also need to come before City Council again for approval, said Harrisburg Business Administrator Dan Hartman.

The city expects the project to be completed by the end of the year. Hartman added that PennDOT has committed to repaving the roadway, as well.

“We are really excited for the way that this is going to work out for the residents of this neighborhood,” Maisel said.