The Jewish Federation of Greater Harrisburg envisions a lap pool and convertible ‘gymatorium’ for Duncan Hall on its new Grass Campus.

“It takes one second to walk on the campus and be inspired by what’s happening here, and a lot of people felt that immediately.”

Abby Smith, president of the Jewish Federation of Greater Harrisburg, is giving TheBurg a tour of the Alexander Grass Campus for Jewish Life. Seen through her eyes and ebullience, the reimagined but still-vacant space—most recently known as Dixon University Center—truly does seem to hum with activity. 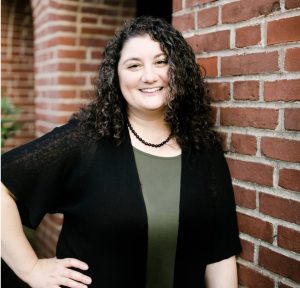 “Our current campus just doesn’t reflect who the Jewish community is,” she said. “We didn’t look on the outside how we are on the inside—this very philanthropic, community-minded set of organizations in this not-that-spectacular space. This lives up to who our community is.”

The Jewish Federation is “planting a seed” that will radiate throughout central Pennsylvania, said Benedict Dubbs, president of the campus designer, Murray Associates Architects.

And like a beehive, the space is crammed beyond capacity. News in August 2020 that Pennsylvania’s State System of Higher Education was selling its six-acre, underutilized Dixon University Center three blocks down Front Street set off a cascade of activity. Calls to backers. Board votes. Dialog with tenants and stakeholders. Preparing a bid. Finally, accepting the gift that made it all possible—backing from the Alexander Grass Foundation to help buy the $4.56 million site.

The foundation president, Elizabeth Grass Weese, and her brother, Roger Grass—children of the late Rite Aid founder and philanthropist Alex Grass—appreciated the site’s self-sustaining business model, said Smith. They also liked “the idea that their dad’s legacy could be connected not just to such a beautiful campus and Harrisburg’s Jewish community but to future generations, as well. Alexander Grass was a huge part of how Jewish Harrisburg was on the map nationally, and this puts us back on the map.”

Sandy Cohen, past president of the JCC and the Jewish Federation, is co-chairing fundraising for the new site. He attended kindergarten in the JCC, when the building was new and marked a new era for Harrisburg’s Jewish community as it moved from the Midtown building that now houses H*MAC.

Cohen “grew up in that building,” the social hub where kids bowled and danced, he said.

“Someone built that for us,” he said. “It’s now 65 years later, and our current building—it needs a lot. The Grasses did this for us. Giving back to the community, I can’t say no. If someone did it for us, I want to do it for that next generation, for generations to come.”

With the October 2021 announcement that the federation had submitted the winning bid for the site, the Grass Campus was born.

“While we did not have requirements for the use of the property, we believe the Jewish Federation’s plans are a good fit for the location and the community,” said PASSHE spokesman Kevin Hensil.

“We’ve already been able here at the ‘J’ to have some intergenerational programs, but I really see us being able to expand our offerings,” she said. “The sky’s the limit. We want to make sure we’re serving the needs of the community for generations to come.”

A vision of better serving the entire community is driving the transformation, said Smith. Plans tuck existing uses and programs into the campus buildings constructed, mostly, in the early 20th century for the original site developer, Harrisburg Academy:

The grassy quadrangle bordered by campus buildings and Front Street will remain unspoiled. For one thing, there’s a parking garage underneath. For another, it’s just beautiful, and the Jewish Federation likes it that way. Smith envisions neighborhood residents walking their dogs. Dubbs sees outdoor lectures and movie nights. A volunteer committee of landscapers and arborists is developing plans for the site, including the early learning center’s garden-to-table curriculum.

“Within Judaism, there are so many values that connect back to the earth,” said Smith, citing the Tikkun Olam teaching of a “responsibility to heal the world. It is within our tradition to care about the spaces that we inherit on the earth.”

Other volunteers are offering their expertise to develop IT schemes or address security. “I think they just need to be asked,” said Smith, a volunteer whose day job is president and CEO of Team Pennsylvania. “Just give them the opportunity to step up.”

Within that volunteer cadre, Cohen and his wife, Marcia—who led development of the JCC’s childcare in the early 1980s—see young leaders emerging.

“I’m now the old guard, but I’m happy to see that younger people are stepping up to take leadership roles,” Cohen said. “They’re enthusiastic about it. They’re excited about it.”

Much of the office space will be ready for occupancy this year. Completion of the early learning center and the gym will stretch into 2023, but “hopefully, early 2023,” said Smith. Programs are expected to continue uninterrupted through the transition.

“If this is a very large book, I think we are in the early chapters of something that will write itself over many years and decades, and it will become better and better,” he said.

Just like the JCC today, much of the Grass Campus will serve the non-Jewish community, said Smith. After all, the conversion also embodies the Jewish value of tzedakah, “an obligation to giving back.”

For more information on the Jewish Federation of Greater Harrisburg, visit www.jewishharrisburg.org.