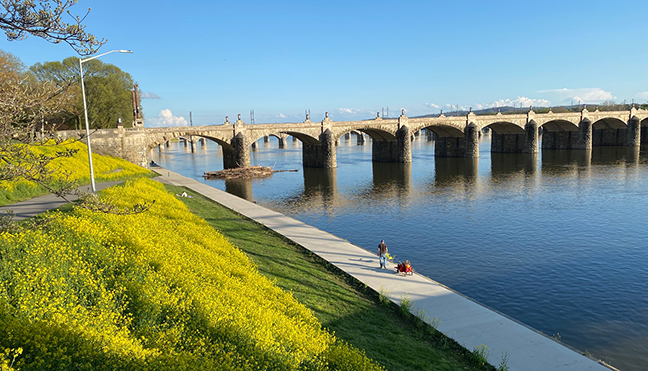 The Market Street Bridge, from Harrisburg

The future of the Market Street Bridge appears to be coming into focus, as the PA Department of Transportation seems to be settling on a rehabilitation plan.

On Friday, PennDOT stated that it expects to move ahead with “modified Option 1,” which adds a new utility bridge to the previously announced plan.

“PennDOT has selected to proceed further with the design and environmental clearance based on a modified Option 1 with the addition of a separate utility bridge to relocate all utilities to reduce the overall construction time” according to the department’s announcement.

Last January, PennDOT unveiled three possible plans for the $63.8 million, multi-year project and asked for public comment. The plan now proposed came about as a result of that comment, PennDOT said.

Option 1 maintains the current, four 10-foot lanes for both the “eastern” bridge, which spans the Susquehanna River from Harrisburg to City Island, and the “western” bridge, from City Island to the west shore.

For the western bridge, two 7-foot sidewalks, along with 2-foot shoulders, would be constructed, which would provide additional space for bicyclists and a buffer area between vehicles and pedestrians on the sidewalks. Additional bicycle signage and pavement markings, such as sharrows, would also be added from the west shore to the east shore.

PennDOT said this option would allow it to have the flexibility to re-stripe the roadway in the future to take out a lane and add additional bike/pedestrian space if needed. A diagram shows proposed changes to the west part of the Market Street Bridge. The bridge’s current configuration is at the top and proposed configuration at the bottom. Courtesy: PennDOT

Notably, this plan calls for the addition of a narrow utility bridge next to the Market Street Bridge. Currently, utilities, including include gas transmission lines, multiple fiber optic telecommunications lines and a sewer line, run beneath the sidewalks of the bridge.

According to PennDOT, building a separate bridge for the utilities will shorten the construction period from about 10 years to five to six years. Construction is slated to begin in 2024. A rendering of the Market Street Bridge, with the construction of a separate utility bridge. Courtesy PennDOT

The project would proceed in three phases:

Phase 1 – Construct the utility bridge and relocate all utilities from Market Street Bridge to the new utility bridge. Existing travel lanes will be maintained except for short-term lane closures with flagging to accommodate utility reconnections.

Phase 2 – Construct the westbound (upstream) side of the bridges. One eastbound lane will be maintained with all westbound traffic being detoured via Harvey Taylor Bridge. Access to City Island will be from the eastbound ramp.

Phase 3 – Construct the eastbound (downstream) side of the bridge. One eastbound lane will be maintained on the upstream newly constructed side with all westbound traffic being detoured via Harvey Taylor Bridge. Access to City Island will be from the westbound ramp.

Information, including a project overview, project displays, and methods to provide comment, can be viewed on the project website at Market Street Bridge. An in-person open house plan display will be held on Thursday, June 2, from 6 p.m. to 8 p.m. at Kinsley Hall, 20 Market St., Wormleysburg.

Comments will be accepted through Friday, June 17.