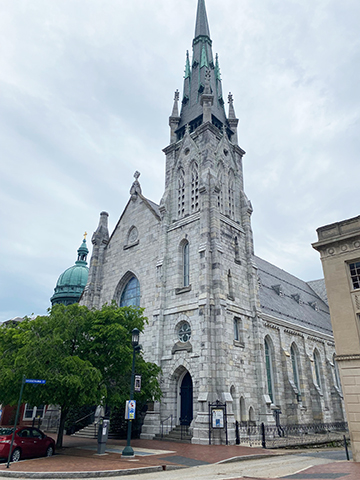 Harrisburg is rich with majestic, historic churches, and one of the most famous will mark an important milestone this weekend.

On Sunday, Grace United Methodist Church will celebrate its bicentennial as a congregation.

Grace traces its roots back to 1810, with a visit from an early Methodist circuit ride preacher who passed through the fledgling city. A decade later, the congregation was strong enough to hire its own minister and embark on building its first church, which was located at 321 N. 2nd St. in Harrisburg.

In 1871, construction began on the current, Gothic-style church at 216 State St., a block from the PA Capitol. In fact, the state legislature met in the church for over a year after Harrisburg’s original Capitol building burned down in 1897.

In recent years, the church was slated to close, but the congregation rallied to keep the doors open, even as most other UMC churches in the Harrisburg area were shuttered and sold.

For Sunday’s event, Bishop Cynthia Moore-Koikoi and Bishop Sandra Ball Steiner, the co-superintendents of the Susquehanna Annual Conference of the United Methodist Church, will be featured guest speakers, according to the church.

The celebration was originally planned for 2020, but didn’t take place due to the pandemic.

“Now, as public gatherings are again taking place, the worship will focus both on the church’s long history in the community and its continuing rebirth from a time in which it was targeted for closure,” according to a release from Grace UMC.

Grace United Methodist Church, 216 State St., Harrisburg, will hold its worship service and celebration starting at 11 a.m. on Sunday, May 22.