Community members talk to engineers about the Market Street Bridge project at an open house held by PennDOT.

On Tuesday morning, people filed into the Wormleysburg Borough Office with questions about a major bridge rehabilitation project proposed for Harrisburg.

With informational poster boards and engineers placed around the room, PennDOT welcomed the public to comment on its plan to make major improvements to the Market Street Bridge.

“We want to know what the public wants,” said Heidi Mertz, the project manager for the bridge rehab. “We are willing to listen and to see what we can come up with.”

Late last year, PennDOT announced its $63.8 million plan for the bridge, which spans the Susquehanna River, connecting downtown Harrisburg to Wormleysburg, as well as City Island in the middle.

According to PennDOT, the bridge is in “fair to poor” condition with cracking, rusting and drainage issues that they plan to address.

The project will include work on both the east side of the bridge, which connects Harrisburg to City Island, and the west side, which connects City Island to Wormleysburg. Under the plan, PennDOT will rehab the historic arches of the near 100-year-old east portion and replace the deck and cracking sidewalks. They also plan to construct a new superstructure (deck and beams) on the western side.

All of this work will address the structural issues that the bridge has and “maintain a safe and efficient way to cross the Susquehanna River,” according to PennDOT.

But there’s a lot more to the project, changes that would impact the users of the bridge, as well as the businesses around it. The project could include cutting out lanes, creating new bike lanes or widening sidewalks.

This is what PennDOT wants input on, and on Tuesday, Harrisburg area residents showed up to voice their opinions.

Kevin Kulp, president of the Harrisburg Senators, was one of those people. He heard about the project and was concerned about how it would affect traffic to City Island, where FNB Field, the Senators’ stadium is located.

“I’m really glad I came,” he said. “Seeing the options, it’s certainly important for us to stay informed.”

PennDOT is presenting three options to the public:

Option 1: Keep four lanes of traffic and two sidewalks on each side of the bridge, improving sidewalk surfaces. Only on the western side would sidewalks expand and 2-foot shoulders would be added to provide space for bicyclists. With this option, PennDOT would have the flexibility to re-stripe the roadway in the future to take out a lane and add additional bike/pedestrian space if needed. 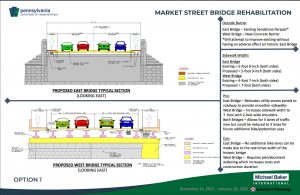 Option 2: Keep four lanes of traffic on each side of the bridge. Eliminate the upstream sidewalk on both to make room for a widened, near 10-foot, downstream sidewalk. This would be shared use for both pedestrians and bicyclists. Two 1-foot-wide shoulders would be created on the western side and one on the eastern side for additional space for bicyclists. Option 3: Reduce to three lanes of traffic, eliminating one. PennDOT would make a wider upstream sidewalk for pedestrians and a wider, 10-foot downstream sidewalk for shared use. They would also add 2-foot shoulders between vehicle lanes and raised sidewalks—additional space for bicyclists. According to Mertz, the Market Street Bridge sees “plenty” of pedestrian and bicycle use, warranting the multimodal upgrades.

“I applaud them for the restoration of the historic eastern bridge,” Morrison said. “But they could just restore this as is and not try to make it a 21st-century recreational bridge.”

Morrison doesn’t see bicyclists using the bridge as much as PennDOT thinks they will. He pointed out what he sees as an unsafe crossing area once riders cross the bridge onto Front Street in Wormleysburg. He also cited the Harvey Taylor Bridge as an example of a failed multimodal attempt, saying how the pedestrian walkways, added in the early 2000s don’t get much use.

“I’m afraid we will get the same result,” Morrison said. “I’m afraid it’s going to be a waste of money.”

Morrison proposed that PennDOT explore an alternate option–restoring the western span of the Walnut Street Bridge and making that the primary non-vehicular passageway for cyclists, runners and pedestrians.

A few bicyclists showed up at the open house, including Dick Norford, a Capital Area Greenbelt Association (CAGA) board member. Norford thinks the pedestrian and bike lanes proposed for the Market Street Bridge will be used.

“There’s an ever-increasing number of people commuting on bicycles,” he said.

Norford had concerns about the safety of option two, which only has one shared sidewalk for bikers and pedestrians. But overall, he favored the idea of increasing access for bikers on the bridge.

“If we make it more inviting for bicyclists, they will use it,” he said.

PennDOT plans to begin construction on the Market Street Bridge in 2024. Mertz said that construction could take two to three years, plus additional time for the movement of utility lines under the sidewalks.

There is a possibility of that timeline changing depending on what happens with the South Bridge of I-83, which PennDOT has proposed widening and beginning to toll, Mertz explained. According to Mertz, they wouldn’t have construction taking place on both at the same time.

Throughout the Market Street Bridge construction, PennDOT said there will be access to City Island. They are still seeking public input and deciding on how traffic will be maintained and detours will be employed.

Kulp is nervous about the construction’s impact on allowing visitors easy access to the island’s amenities, including Senators games.

“We have to make sure people are going to be able to get to the island and get home in an efficient manner,” he said. “I want to look out for the interest of all the vendors on City Island.”

PennDOT is accepting public input on the Market Street Bridge project through Feb. 11. An additional open house will be held on Jan. 18, from 6 to 8 p.m. in the Wormleysburg Borough Office, Knisley Hall. Comments can also be made online.

Updated on 1-20-22 to include a statement from David Morrison.