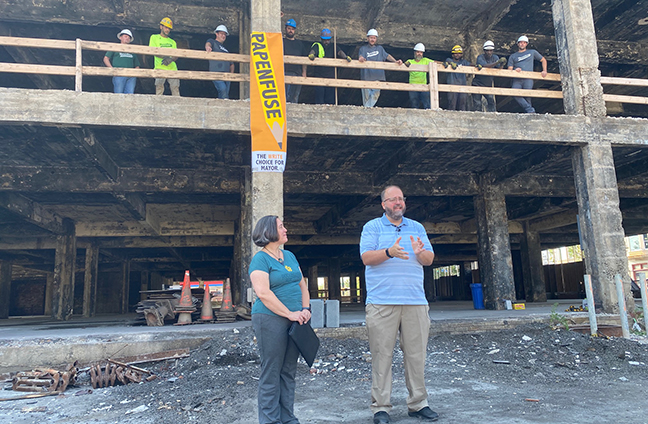 Harrisburg Mayor Eric Papenfuse made it official today, declaring that he is running as a write-in candidate in the November general election.

Papenfuse, with his wife Catherine Lawrence beside him, made the announcement while standing in front of the Hudson Building, recently renamed the Atlas, a structure in Uptown Harrisburg undergoing extensive renovation.

A line of construction workers stood in the background as Papenfuse spoke to the media.

He stated that he decided to run for a third term, despite narrowly losing the Democratic primary in May, based on his track record of fiscal management and rebuilding the capacity of city government, along with a pledge to forge a coalition across the city.

“I plan to lead by decisive outreach in a way that brings in people and has their voices heard in ways that they haven’t been heard before,” he said.

In May’s Democratic primary, Papenfuse lost by 46 votes to City Council President Wanda Williams. Two other candidates, David Schankweiler and Otto Banks, also tallied more than 20% of the vote in the five-person race.

On Monday, Papenfuse named Banks as the city’s new director of economic development.

“There was no mandate in the primary,” Papenfuse said. “If there was any lesson from the primary, it’s that we have to build a broader coalition. We have to work together, and I’m the candidate for that.”

Write-in campaigns are rarely successful, as the candidate’s name does not appear on the ballot, forcing voters to take an extra step to write in their choice.

Papenfuse said that he believed he could defy the odds. In an interview preceding today’s announcement, he described his decision to run as a write-in as a “long process.”

“I really took some time over the summer to think about what I wanted to do,” he said. “The way I saw it, I could either give up and watch the city fall apart or I could fight to keep the ship from sinking and keep us on course.”

He said he’s running on “three strengths” based upon his two terms as mayor: “strong fiscal management,” “ethical leadership” and “a commitment to bipartisanship.”

He said that, when he first became mayor in January 2014, the city was just emerging from a historic financial crisis driven by years of overspending and fiscal mismanagement. Since then, the city has run consecutive balanced budgets, has accumulated a large fund balance and, last year, got the state legislature to extend its extraordinary taxing authority.

“All of that is the proven track record which I think is the story of success for the city,” he said.

Papenfuse also said that, during his years as mayor, he’s doubled the size of the city government and vastly increased its capabilities, which had been devastated during the fiscal crisis.

“And we’re able to pay for it and did it slowly over the course of eight years,” he said.

He also said that he ended “pay to play” politics, which, he said, took root under long-time Mayor Steve Reed.

In addition, Papenfuse took aim at Williams, saying that she was part of the “corrupt” Reed team and that her election would endanger the city’s progress.

In response to Papenfuse’s announcement, Williams issued the following statement:

“Today Eric Papenfuse revealed his true colors,” according to Williams’ statement. “After a history of supporting Republicans over Democrats, using the mayor’s office to give favors to his political allies, and working for developers, not the people, he announced a last-ditch attempt to stop a black woman from becoming mayor. As I did in the primary, I will beat (him) in November and end his tenure of sexism and cronyism.”

In addition to the Democrat Williams, the ballot will include city businessman Timothy Rowbottom, who received the Republican nomination for mayor.

Papenfuse said that recent changes to voting in Dauphin County may aid his write-in effort. For instance, many more people now vote by mail and, at the polling place, people are given a pen to vote and no longer can push a button to vote a straight party ticket.

“I will be going out of my way not only to forge a coalition with people who voted David Schankweiler and Otto Banks, but also Republicans and independents,” he said. “I’m a candidate who’s always desired to work broadly with people, not narrowly within the wedge issues of Democratic politics.”

The general election is slated for Nov. 2. However, Dauphin County is expected to begin to send out mail-in ballots in the coming weeks.

This story was updated to include a statement by Wanda Williams.