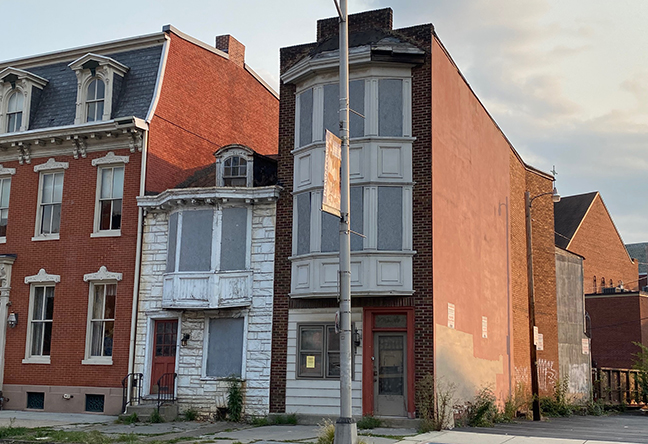 Under a current proposal, the two buildings on the right would be razed for a new mixed-use building.

A Harrisburg-area builder is proposing a five-story, mixed-use building for downtown Harrisburg, which would require demolition of two derelict structures now on the site.

On Monday night, the project’s architectural firm presented a plan for 512-514 N. 2nd St. to the Harrisburg Architectural Review Board (HARB).

Project architect Allison Krichman told board members that the design reflected a contemporary aesthetic that respects the historical integrity of the block.

“We hope that we’ve evolved the project to be a very contextual, 21st century contemporary building that fits in with the context around it,” said Krichman of the Harrisburg-based firm, Chris Dawson Architect.

She stated that the building’s structural design, materials and balconies combine to yield a modern look that addresses a contemporary desire for open space while still respecting the block’s architectural legacy. 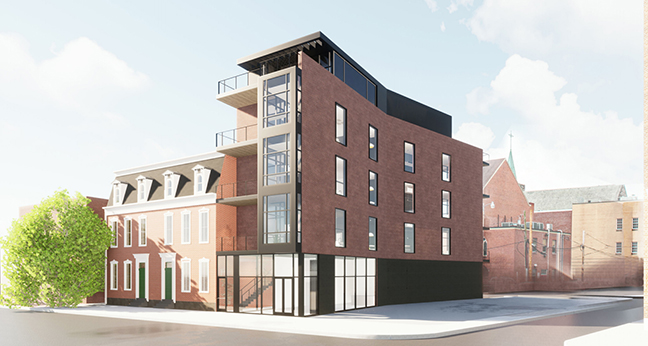 A rendering of the current design for a building proposed for the 500-block of N. 2nd Street in Harrisburg

At the meeting, the firm represented their client, developer Derek Dilks, who is proposing to raze the dilapidated buildings now on the site and construct a new, 5,000-square-foot building with first-floor retail or restaurant space and seven apartments on four floors above.

Last year, Dilks bought the two forlorn buildings for $90,000 from former area attorney Gilbert Petrina, who had owned them for decades. Three years ago, HARB gave Petrina permission to raze the buildings, but he never did so.

The city’s Planning Bureau has pushed back on the proposed design, stating that it lacks continuity with the historical streetscape.

“Replication or reproduction is not the goal with new infill construction but the retention of character and continuity of the existing fabric is important to preserve the feel, character, and experience of the historic district,” states the bureau’s case report. “The current proposal is more differentiated than it is compatible, and it is recommended that the design is amended to ensure more contiguous architectural harmony with surrounding buildings.”

Several HARB members on Monday agreed with the report’s findings, stating that they believed that the design could fit in better with the other buildings along the street, which generally are a century-plus old.

HARB members requested possible design alternatives, and the case was tabled and continued to the October meeting.

HARB approval constitutes just one step in what could be a lengthy approval process for the project, which also must go through the land development process, with final approval by City Council.

At the meeting, HARB also voted to allow some modifications to a Midtown building slated to become a 16-unit, market-rate apartment building, but pushed back on some of the changes requested by the developer.

The developer also will be permitted to mount a sign to the building at the corner of Green and Cumberland streets, while closing off building access from Green Street, instead employing the main entrance on Cumberland Street.

The project will convert the 10,920-square-foot building to one- and two-bedroom units. The developer plans to begin the project soon, with an expected completion date of mid-2022. The city already has approved the project’s land development plan.