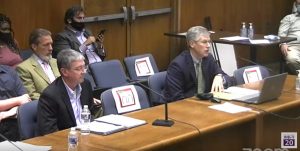 Screenshot of Steve Zimmerman (left), an IT consultant for Harrisburg and Terry Quinn of Tyler Technologies who discussed the city’s computer upgrade on Tuesday.

Decades after it was installed, Harrisburg’s aged mainframe appears headed for the scrap heap, as the city plans a major upgrade of its municipal computer system.

City Council, at a legislative meeting on Tuesday night, passed a resolution that will start the process of phasing out the city’s existing, outdated mainframe and implementing new, more efficient IT systems.

The current system is about 35 years old, according to Steve Zimmerman, a former director of information technology for Harrisburg, who will provide consulting to the city on the legacy system. The city will pay Zimmerman up to $135,000 for one year of consulting work as it transitions off the old mainframe.

The city then will use Texas-based Tyler Technologies, a software company that works in the public sector, to complete the upgrade.

Over the next two years, the tech company will introduce an enterprise resource planning (ERP) system that will manage day-to-day internal activities such as accounting, budgeting, payroll, scheduling and tax billing.

Harrisburg residents may also see some benefit from the upgrade, as it impacts businesses license and dog license registration, building permits access, as well as online payments.

Tyler Technologies also provides contracting for the Harrisburg School District and works with over 100 entities in the state, said Terry Quinn, senior account executive of Tyler.

In other action, council passed a resolution to continue an intergovernmental cooperation agreement with Swatara Township to allow the city to use a composting facility owned and operated by the township. The city first entered into the agreement in 2020.

Under the new contract, Harrisburg will pay the township $50,000 for the services, whereas the city previously only paid $2,945.10 per year. According to Chris Nafe, Harrisburg’s sustainability coordinator, the township said that they had originally underestimated the cost of operation.