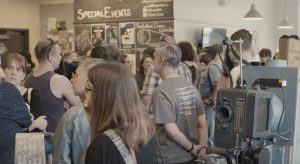 Movie-goers at a past Moviate Film Festival

Film fanatics can look forward to a cinematic experience coming to Harrisburg this weekend.

The Moviate Film Festival will return, bringing underground, avant-garde films to movie-goers at the Midtown Cinema on May 13 to 15.

“The biggest part is bringing the arts to Harrisburg,” said Moviate co-founder Caleb Smith. “There’s definitely something for everybody.”

The festival will feature over 70 films from 12 different countries. Most will be short films, with a few features, including a range of genres from documentary to narrative, experimental, animation and horror. Short films are separated into blocks based on themes.

For one of the main events, Moviate will show a horror film called “Basket Case,” which was recently restored by The Museum of Modern Art in New York City. The director, Frank Henenlotter, will present the new 4K restoration on Friday night, with a Q&A and autograph signing to follow.

“A lot of horror movie fans love this film and are coming from all over to see it,” Smith said.

Smith is also looking forward to a series of short films from or about LGBTQ perspectives, as well as  an event where live music will be played over a projected film.

This will be Moviate’s 23rd festival and the first in-person event since before the pandemic. Smith is excited to return the theater.

“There’s something to cinema where, if you’re in a room with 20 other people, it’s more of a communal event,” he said.

He hopes that the festival and the films will inspire other artists to create.

Attendees can purchase individual tickets to films or buy an all-festival pass, which includes all programming.

Midtown Cinema is located at 250 Reily St., Harrisburg. For more information on the Moviate Film Festival and to see the full schedule of events, visit their website. To purchase tickets, visit the Midtown Cinema’s website.