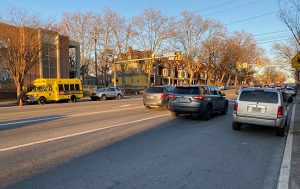 Harrisburg residents soon will get a chance to offer their input on a State Street construction project.

On Monday, the city announced three public meetings, scheduled for June, for residents to review and comment on draft redesigns of the roadway.

“What is clear is we need to give our residents more of an opportunity to voice their concerns on this project,” said Matt Maisel, the city’s communications director.

The State Street Rapid Response project, which began planning in 2018, broke ground in Allison Hill last month. However, only two weeks later, the project came to a halt when residents expressed concerns. At a City Council meeting last week, city officials listened to public comments from dozens of residents on the construction and announced that they would go back to the drawing board for a redesign.

The city will bring new drafted designs to the public to gather feedback. Engineers will attend to answer questions and speak to residents.

The meeting dates and locations are as follows:

Additionally, the city announced a website that will allow residents to send in public comments.

“We are very excited about the new web page as an additional way for residents to share their thoughts,” Maisel said. “We realize not everyone will be able to make the public meetings, which is why it was imperative the city gives neighbors an opportunity to have their voice heard regardless of their situation.”

At recent city council meetings, many residents made known their opposition to aspects of the original design, specifically the plan to limit parking along the corridor during certain times of the day and to add dedicated bike lanes.

Since the city issued a cease-and-desist order to contractor Kinsley design in April, limited construction has resumed to complete unfinished ADA-compliant sidewalk ramps.

According to Maisel, the process of taking public comment, redesigning the project and resuming construction may take only a matter of months. A new plan must be approved by PennDOT, which owns State Street.