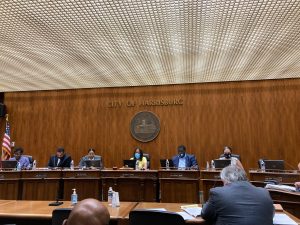 A development project can now move forward with renovating a long-abandoned building in Allison Hill.

On Tuesday, Harrisburg City Council approved the transformation of a blighted building at 100 N. 13th St. into apartment units. Council voted in favor of the resolution, 5-2, with council member Jocelyn Rawls and council President Danielle Bowers voting in opposition.

Radon Construction plans to renovate the 11,500-square-foot building, formerly the Church of God/Central Publishing House. The renovation includes creating 12 apartment units, which the developer said should rent for about $1,000 to $1,100 a month.

“I believe that would leave our residents cost burdened,” Bowers said, explaining her opposition to the project.

However, at a previous council meeting, developers explained how they had to adjust the planned rental rate to cover the rising cost of construction.

Also at the meeting, council approved a resolution to contract with an organization that will assist the city with gun violence prevention efforts. The Research Foundation of the City University of New York, on behalf of the National Network for Safe Communities at John Jay College will provide services. The $210,000 contract is funded through a $500,000 grant from the Pennsylvania Commission on Crime and Delinquency.

The organization would study violence in Harrisburg, determine a strategy to address it and assist with implementation. The contract term is two years.

Additionally, on Tuesday, council confirmed the appointment of Stephen Ekema-Agbaw as the senior deputy city solicitor for Harrisburg.