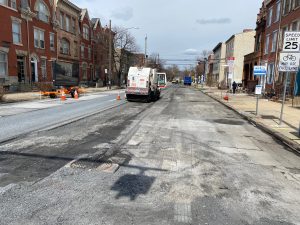 Harrisburg will continue to hit the gas on a major road construction project this week.

On Tuesday, the city will begin paving N. 2nd Street, the next step in a process to move the corridor from one-way to two-way traffic.

Crews will start paving along the east side of 2nd Street (right side), from Forster to Division Street, on Tuesday, April 19. The west side will be paved on Wednesday. Thursday will be used as an extra day in case more time is needed.

The street will move northbound with one lane of traffic during this time. Paving will begin at 6 a.m. and end no later than 6 p.m.

“No Parking” signs will be posted along the length of the road. Vehicles not removed from the street before 6 a.m. will be towed. Residents who use 2nd Street for residential parking can park on side streets during this time with no concern of getting a ticket.

On Monday, April 25, crews will paint lines on the street to represent new traffic patterns. Once new lines are complete, the city will begin constructing medians and continuing work on installing ADA-compliant sidewalk ramps. During this time, the city expects parking to be open on the road, with the exception of areas where crews will need to work. “No parking” signs will be posted with 48 hours of advanced notice.

Harrisburg began the conversion project last May in an effort to make the road safer and more walkable and started the road milling process earlier this month. Last week, Harrisburg officials announced that the project will continue through late October or early November, but that the road will switch to two-way traffic earlier, in mid-June.

The 2nd Street project is part of the city’s Vision Zero initiative to eliminate pedestrian fatalities on its roads.