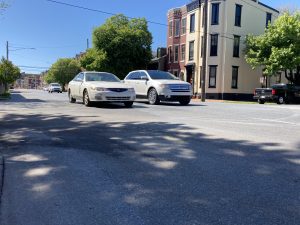 Harrisburg residents will start to see changes coming to N. 2nd Street as the city reconfigures it to be safer and more walkable.

Mayor Eric Papenfuse had no well wishes for N. 2nd Street as we know it, as he ceremoniously broke ground on the $5.7 million conversion project on Thursday morning.

“We are about to embark upon reversing one of the worst engineering decisions in our city’s modern history,” he said.

N. 2nd Street was long a two-way, neighborhood street. However, the state and city converted several streets to one-way traffic, including N. 2nd Street, in the 1950s to accommodate suburban commuters.

Harrisburg now will return the pattern back to two-way traffic from Forster to Division streets, adding pedestrian and bike-friendly elements, Papenfuse said. The switch to two-way will come near the end of the project on April 19, 2022, city Engineer Wayne Martin said.

Construction will begin in the coming weeks, as the city takes on adding over 100 ADA-accessible ramps to intersections along the corridor, in compliance with PennDOT’s construction guidelines, according to Martin. Portions of the brick sidewalk near the intersections will be replaced, as well.

“You’re going to see a much more accessible street for everyone,” Papenfuse said.

The city will then replace traffic signals with mini-roundabouts in the intersections at Kelker, Verbeke and Reily streets.

New traffic signals will be added to accommodate the two-way flow of traffic, along with new crosswalks and pedestrian refuge areas in the middle of the road. New markings on the road will remind drivers to share the road with bicyclists. 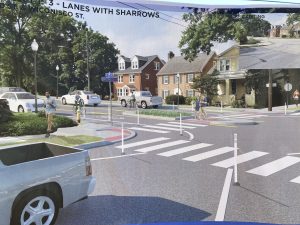 A rendering of the two-way street

During construction, sections of the corridor may shift to two lanes for brief periods of time, Martin said.

Once this work is done, the section of N. 2nd Street will switch to two-way traffic with a 25-mph speed limit. The entire stretch will be repaved, along with some sections of the cross roads. Martin expects all construction to be completed by mid-October 2022.

The city originally planned to convert the road to two-way at the beginning of the project, but construction plans changed for efficiency reasons, Martin explained. Officials said that they also wanted the conversion to coincide with a road width reduction project coming to Forster Street between the Harvey Taylor Bridge and N. 2nd Street.

Wallace Montgomery is the designer for the project and JVI Group was awarded the contract.

Papenfuse highlighted some other upcoming road changes that are part of that plan.

A roundabout construction on 7th Street is in progress and expected to be completed next year, around the same time as the 2nd Street project.

This year, the city will start work on one of Harrisburg’s most dangerous roads, State Street, which will reduce the width of that corridor on Allison Hill.

Martin added that a mini-roundabout project at the intersection of Mulder and Derry streets will go up for bid today. The Allison Hill paving project, which will pave multiple corridors in the neighborhood, will also go to bid today.

During this year and next, Harrisburg will complete a number of paving projects totaling $10 million, Papenfuse said.

“We have a lot planned in the city,” Papenfuse said. “It’s all part of a comprehensive Vision Zero commitment to making Harrisburg more walkable and safer for all.”