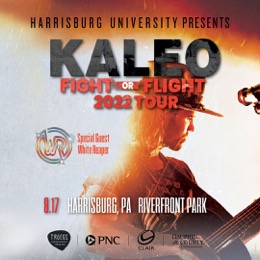 There definitely won’t be a shortage of live music in Harrisburg this summer.

Just last year, the Grammy-nominated band released its second album, “Surface Sounds.” The band is known for its chart-topping, alternative song “Way Down We Go.”

For the summer concert, KALEO will be joined by punk band White Reaper.

Just a week ago, HU Presents announced that pop-rock band LANY, along with guest band Surfaces, would perform on Aug. 19 in Riverfront Park.

Several other bands will also make an appearance at Harrisburg’s Riverfront Park this summer. Death Cab for Cutie, with special guest Illuminati Hottie, will perform on July 14. American indie rockers Lord Huron, with special guest First Aid Kit, will play on Aug. 20. And HU Presents the National on Sept. 24.