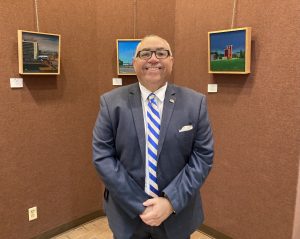 Harrisburg has a new top official overseeing business development in the city.

At a press conference on Tuesday, Mayor Eric Papenfuse announced Elvis Solivan as the new director of business development/LERTA administrator.

“He is an incredibly impressive person, and we are lucky to have him coming to work here,” Papenfuse said.

Solivan has experience in affordable housing, workforce development, government affairs and customer services, according to the city.

He previously served as the regional senior advisor at the U.S. Department of Housing and Urban Development (HUD) and as a communications specialist at the Philadelphia Parking Authority. Solivan also held the role of state director for employment opportunities for the Pennsylvania Department of Human Services.

Papenfuse said that Solivan was recruited by the city’s Director of Economic Development Otto Banks, who was just hired in September. Banks also formerly served as a top official with HUD.

In his new position, Solivan will oversee business development and relationships in Harrisburg, while also managing LERTA, the city’s tax abatement program for developers.

Solivan said that providing education, technical support and resources to small businesses will be his top priorities for helping businesses coming out of the pandemic.

“I’m going to make a promise to you that I’m going to visit every single business to talk about what they need, what the problems are and how to resolve these issues,” he said.

Solivan speaks both English and Spanish and plans to focus specifically on reaching out to Harrisburg’s Latino population through focus groups and meetings with business owners.

He also talked about the possibility of starting a youth entrepreneurship program, as well as assisting veterans and people with disabilities who want to start a business.

“I’m facing the challenge, and I’m ready for it,” Solivan said.

His salary remains the same as his predecessor at $57,977.