At the beginning of the meeting, Thomas Leonard, chair of the city’s Zoning Hearing Board, stated that Seven Bridges Property Development had withdrawn its application for the construction of two small apartment buildings in Midtown.

The developer was originally scheduled to make its case for zoning relief last November, but requested a series of continuances from month to month. It finally withdrew its application entirely for the two-building project, according to the city.

Seven Bridges could not be reached immediately for comment.

Next, the board heard the continuation of a case from May—a proposal to convert a blighted, 11,500-square-foot industrial building on Allison Hill into a 12-unit apartment building.

Philadelphia-based Radon Construction wants to renovate and construct one-bedroom units in the former Church of God/Central Publishing House at 100 N. 13th St., a building that has been abandoned for decades. However, its proposal has been met with concern by some neighbors, mostly over issues of parking. 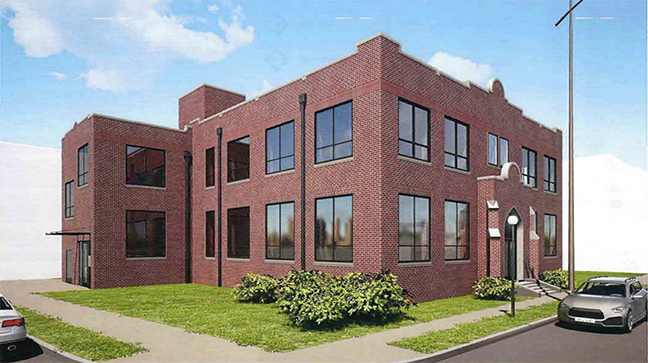 A rendering of the proposed apartment building (Chris Dawson Architects)

At the virtual meeting on Monday night, Loretta Barbee-Dare, president of the Summit Terrace Neighborhood Association, asked why more parking couldn’t be provided on empty lots at the rear of the building on Linden Street. Those lots conveyed with Radon’s $135,000 building purchase from CPenn Patriot Properties in January 2020.

“With nine parcels, how can you not find more parking for your tenants?” asked Barbee-Dare, who advocated for 15 total parking spaces.

After much discussion, the board approved zoning relief of three parking spaces, indicating a configuration with 11 total spaces, with the understanding that the project’s site civil engineer will try to carve out additional parking in its final design.

“If there’s the opportunity to squeeze in more space on these lots, they will,” said the project’s architect, Chris Dawson.

With zoning approval, the project’s land development plan now must be approved by the city’s Planning Commission and City Council, before construction can begin.

Parking also was a key issue in the final case on Monday night, a proposal by Harrisburg-based D&F Realty Holdings to convert a 16,500-square-foot building at 423 Division St. into an apartment building.

The 65-year-old building long housed Congregation Chisuk Emuna, but the synagogue was heavily damaged in a 2009 fire. In 2012, it was sold to the Ahmadiya Movement in Islam, but has remained boarded up and blighted. D&F Realty bought the building in May for $110,000, according to Dauphin County.

A developer wants to turn the former Chisuk Emuna synagogue into an apartment building.

Originally, D&F proposed a 24-unit apartment building, which met with objections from both the city Planning Bureau and the Planning Commission, as the city’s zoning code only allows 11 units by right for a building of its size.

D&F has now scaled back its proposal to 18 units, which Deputy Planning Director David Clapsaddle said that the city could support.

The project also has no parking on site, but D&F has proposed entering into an agreement for parking with the Scottish Rite Cathedral, which is located about two blocks away.

“We think the 18 units and the parking with the Scottish Rite Temple really heads us in the right direction,” said Clapsaddle, who added that the city wants to encourage adaptive reuse of Harrisburg’s older institutional buildings.

Speaking on behalf of D&F, Dale Hair of Lemoyne-based KD3 Design Studio, said that 18 units were needed for the project to be financially viable, as the blighted, fire-damaged building needs major restoration.

“We’re trying to look to convert this property that has been sitting there for over 10 years in dilapidated condition and get it back on the tax roles, too, “ Hair said. “There is a need for housing, as we know, in this Uptown neighborhood.”

He added that D&F hadn’t yet entered into negotiations with Scottish Rite for parking, but planned to do so.

Nonetheless, numerous neighbors voiced objections to the project, on both density and parking grounds.

“I like the idea of Scottish Rite Cathedral providing parking,” said neighbor Sarah Chambers. “That seems like a good compromise, but it is concerning. What are they going to do when they don’t want to walk over the two blocks to park at the Scottish Rite Cathedral, and they want to park closer to the building?”

In the end, Hair asked for a continuance until the July meeting. He said that he would present more financial information on the project to justify the 18 units at that time, and, in the interim, would work towards an agreement with Scottish Rite for parking.

If zoning relief is granted, the project next would need to have its building plan approved by both the city Planning Commission and City Council.