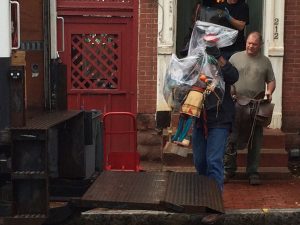 Items seized in a June 2015 raid on former Mayor Steve Reed’s home may soon be part of an auction.

In 2013, our editor wrote about his experience at an auction for the estate of then-Mayor Steve Reed.

He watched people bid on the 5,500 or so artifacts that were up for sale, old-timey bathtubs, oil lamps and chamber pots, that Reed purchased with some $8.3 million in public money.

That was almost eight years ago and, to this day, Reed’s collection is still being dealt with. Most recently, in October 2020, there was a two-day virtual estate sale, this time for items from his personal collection.

But at a City Council meeting on Tuesday night, the former mayor’s name again found its way onto the agenda. A resolution was introduced that would allow Harrisburg and Reed’s estate to auction off over a thousand more of Reed’s artifacts and split the revenue between the two entities and the auction company.

“There were many things that the city’s money bought,” said city Solicitor Neil Grover when asked about the resolution.

During his 28 years in office, Reed became interested in creating museums in Harrisburg and collected artifacts for them. Among those were the Civil War Museum and the PA National Fire Museum, which were built. He also had plans for an African American museum, a Wild West museum and a sports hall of fame, which never came to fruition.

In 2015, his home and storage facility, among other places where these collectibles were kept, were raided and items were taken into possession of the state attorney general’s office, as part of a criminal probe into Reed’s use of public funds. In In 2017, he was given probation, having pleaded guilty to 20-theft related charges. In January 2020, he passed away.

According to Grover, there was a long dispute over who owned many of the artifacts taken from the raids, something that can be difficult to prove legally, he said. Some of the items were less valuable, so the city didn’t raise a dispute over their ownership, Grover explained. However, the more valuable items, which the city hopes to soon auction off, were clearly Harrisburg property, Grover said.

“Our belief is that we own them,” he said.

Grover said that to avoid a lengthy, expensive legal process, Harrisburg decided on a settlement agreement with Reed’s estate.

If passed by council, the resolution would allow Harrisburg to work with Harrisburg-based Cordier Auctions & Appraisals to sell the remaining items, perhaps finally putting an end to a years-long effort to dispose of the last of Reed’s artifacts.

The resolution will be discussed at a council work session on Jun. 29.