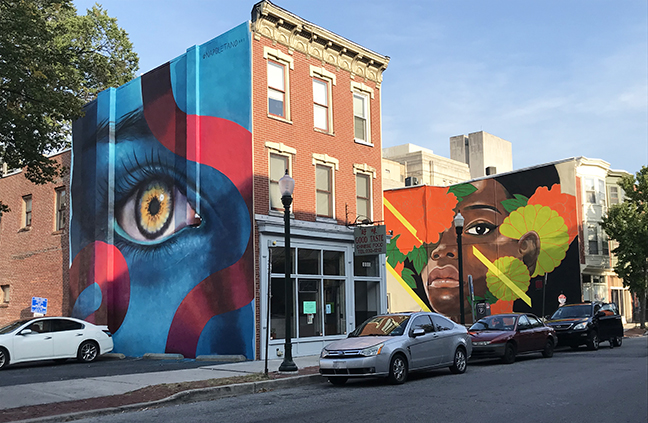 These murals on N. 3rd Street will be part of Sprocket’s mural tour during Gallery Walk on Sunday.

You’ve heard about them, maybe you’ve seen some of them—and now you can learn about them.

This Sunday, Sprocket Mural Works will hold guided tours along the Harrisburg mural trail as part of the 2021 Gallery Walk.

“The tours are a fun chance to go even deeper and share some of the stories about the making of the murals,” said Karen Hendricks, spokesperson for Sprocket Mural Works, the nonprofit behind the proliferation of mural art in and around Harrisburg in recent years.

Participants will have a choice of two walking routes.

The “3rd Street route” will focus on the 3rd Street corridor in Midtown. The “downtown route” will send participants in the other direction, centered on the city’s central business district.

“Each guide has a unique connection to Sprocket, which means each tour will be slightly different in terms of content and, of course, each tour will be customized based on questions we receive from tour-goers,” Hendricks said.

All groups will gather at the foot of the state Capitol steps at N. 3rd and State streets before heading off on their respective walking tours, which will average about one mile in total distance.

Each hour-long tour is capped at 15 people, with priority given to those who pre-register. A $15 suggested donation is encouraged to help support Sprocket, which has mounted dozens of murals since 2014.

“If you want to be sure to save your slot and your desired time, we do advise people to sign up ahead of time,” Hendricks said. “But we will take people if they just show up at the Capitol steps. Just know that we will give preference to people who have already secured their tickets online.”

The mural tours fall smack-dab in the middle of the months-long 2021 Harrisburg Mural Festival. Sprocket’s third biannual mural festival began in June with, to date, new murals in Midtown, Allison Hill and Penbrook.

Additional murals are planned this month and next, including Sprocket’s largest project ever—a mural along the Mulberry Street Bridge.

“Overall, we feel like it’s a very exciting time,” she said. “We love sharing the community’s excitement, joy and appreciation for the murals.”

Sprocket Mural Works will begin mural tours starting at 1 p.m., with the 3rd Street route beginning on the hour and the downtown route on the half-hour. Tour-goers should meet at the bottom of the state Capitol steps at N. 3rd and State streets. To reserve a spot on the tour, visit their website’s mural tour page.