In the words of artist, Gail Walden Coleman of Mechanicsburg, “intuitive work” has been a challenging and, at times, frustrating process in achieving the level of craftsmanship that she demands of herself. By definition, “intuitive painting” will vary from artist to artist, but defining it is where the conundrum begins.

From the novice to the advanced master painter, one must first take brush in hand and then allow the creative side to take over. It is an exercise designed to not fail and to free oneself from expectations. Having metamorphosed from an artist creating multi-faceted jewelry with Swarovski crystals, Gail switched gears, turning to painting several years ago as her creative outlet, broadening her range to flow to estuaries of enlightenment. As fate would have it, her epiphany came when she introduced water as the key ingredient to her work. With that element, her methodology and approach were released, as if the floodgates unleashed. That’s apropos, as her new one-woman show is entitled, “The Art of Allowing: Just Add Water.”

Describing her work, Gail shared, “I began to get messy! I spritzed, dripped, and poured water. I moved it with my fingers, brushes, sticks. I blotted areas and rubbed some areas raw until the fibers in the paper created a new texture.”

Two parts hydrogen, one part oxygen, H2O became the catalyst for Gail when just playing around, adding it to her mix. Water has long been associated with purification. It became transformative as it produced adaptability, fluidity and mutability, joining colors, brushstrokes and even paper together in completing the picture. As an intuitive painter of palette and pattern, Gail is accustomed to following her instincts, allowing the work to take its own form. Prime examples of her works are “Uncharted,” in washed tones of turquoise, indigo and sienna, creating a vista of land to be explored. Terrain variegated and visceral adds verisimilitude to the painting in that art imitates life with its ups and downs. In painting “Always Nesting,” she alludes to the cyclical patterns in nature—of winter turning to spring and the return of new life in its abundant forms, the magical birth of birds carefully protected in nests. It captures a special moment in time and features inky black, copper and cream with shades of green.

Traveling over a body of water, the Susquehanna River, to view this one-month exhibit at the Cornerstone Coffeehouse in Camp Hill offered a pre Labor Day jaunt. This borough’s mainstay is well known on both sides of the Market Street Bridge. Beyond their coffee, baked goods and light fare, Cornerstone has been a launch pad for many local artists throughout the years. Owners Sue and Al Pera feel that these works truly showcase local artistic talent as a regular menu item. In addition to the Cornerstone’s September, Gail Coleman has exhibited her paintings at the Pure Gallery in Arcona, the Art Association of Harrisburg, the Carlisle Arts Learning Center, Perry County Council of the Arts and Stevie’s Bistro in Camp Hill, among others. In the end, her journey is ongoing, with the final destination far off in the distance. By surrendering to her senses and allowing inspiration to flow unrestrained, she puts her faith in the natural ebb of the water lapping at the canvas, going with it, never trying to swim against the current. www.GailWaldenColeman.com

This sixth edition of profiles of Millworks artists arrives just in time for Gallery Walk this Sunday. It features an initial group of artists who signed on back in 2017, when the restaurant/gallery/brewery opened.

These early adaptors include Tara Chickey, Millworks art director, and her husband Caleb Smith, a man of many artistic hats. Joining the duo are Judy Kelly, mixed media artist, and Marsha Souders, clay printmaker, completing the first of four originals there. This exceptional show closes on Sept. 12. 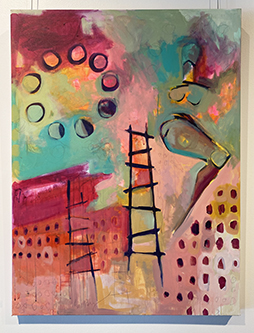 “Lift Me to the Moon” by Tara Chickey

We start with Tara Chickey, whose abstract expressionistic paintings border on the real and surreal, as she mixes and mines memory with actual experiences. Collected over time through travels abroad, Tara creates her works as inspired, imaginative itineraries that lead to the stars, dusted by a palette sprinkled by the fairies. Working with saturated tones of fuschia, rose, teal, purple and pink as if the bees pollinated her paintings, she provides a garden gushing with a glamour only found outdoors. Look for feminine figures and fairies populating the paintings with ladders to the heavens, depicting dreamers and dancers delighting in the bright, bold colors.

Sharing studio 323 is Caleb Smith, a founder of Moviate and instructor in film, humanities and photography. A photographer and filmmaker, Smith is an influencer in the art scene, juggling duties such as programming the annual Artsfest Film Festival each May. International filmmaking in Iceland and Sweden are part of Caleb’s resume. His art of storytelling is explored through various cultures in his documentaries. His photographs on metal plate (pictured) lend an air of mystery and magic to the mix on the lobby walls and in their studio upstairs. 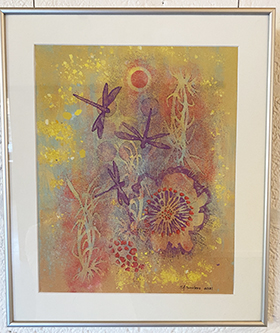 Artist Marsha Souders of Studio 317, once a teacher, now works in the medium of clay monoprinting. She learned the technique from master monoprinter, the late Mitch Lyons. Souders has gone on to develop her own signature style with a nod to cave paintings, dating to 30,000 years old found in Lascaux, France. She embraces Paleolithic paintings of animals with a handprint of man as the first signature seen. Her process encapsulates paint-dyed clay slips applied to Remay paper then rolled onto a thin, clay slab that builds up an image; the print is then lifted. At best, two prints may be produced with no two ever the same but, more often than not, each piece is a one of a kind. Kismet is created when new world technique enhances old world art. Her art becomes vibrantly alive with the edition of tints, from colored pencils and fine line markers. Under these instruments, the prints offer a vitality of spirit and color. 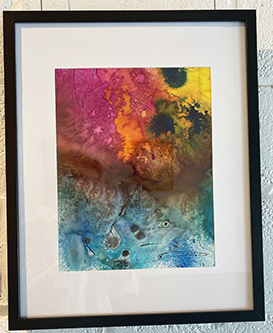 Millworks’ “Robot Girl” also goes by her given name, Judy Kelly, found in Studio 319. Her quirky creations speak volumes about her passion. Fully adoptable, creative characters are comprised from found objects assembled and named, with a profound history attached to each robot. For really, what is a thing made of cast-off parts of this and that without a backstory? Although, thank goodness, her collection has a front story, too. Also in Judy’s wheelhouse are collage, abstract painting, oil and wax, as well as jewelry. For her introduction on the Millworks wall, Judy showcases mixed media works, resplendent and rich in their presentation.

It didn’t make it in time for the Gallery Walk map, but be sure to visit Harrisburg’s newest gallery, Nyeusi, at 1224 N. 3rd St. on your itinerary for sights you won’t want to miss. Nyeusi features African American, Caribbean and local art. This exquisite gallery houses local talent as well as international fare. Meet owners Michelle Green and Dr. Dale Dangleben, as well as Bethany Nicholle, recently voted Harrisburg Magazine “Artist of the Year,” among a bevy of Black creatives showcasing their works.