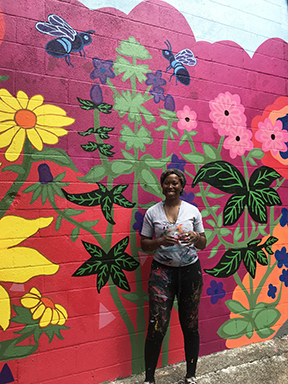 Artist Gloria Jean Martin stands in front of her mural, “The Pollinators,” in the Patrick Alley pocket park.

Simultaneously, a Steelton mural project will begin this week, as two community murals wrap up—one in Penbrook and the other in a Midtown Harrisburg pocket park.

Mural work is set for Sept. 4 to 10, with murals spanning 230 feet across the eastbound side of the bridge—and measuring 7 feet high—in this apprenticeship-type project led by prominent New York City muralist and Harrisburg native Ian Potter.

“With the city’s and PennDOT’s permission, we have been planning and anticipating this project for years,” said Meg Caruso, Sprocket co-founder and president. “Not only is it our most ambitious project ever, but it’s groundbreaking in many ways—using a unique artistic method and process. And we are thrilled to welcome Ian Potter back to Harrisburg, in what feels like a full-circle collaboration, as he mentors several Harrisburg-based artists as apprentices.”

Potter will use an electro pounce machine, similar to an electric pen, to create the metal bridge’s mural artwork. No Harrisburg murals have ever been created using this method.

“Growing up in Harrisburg in the ‘90s, I didn’t see the presence of a mural community, so it’s really cool to come back home and have the opportunity to work with some of the younger generation—giving them some of the literal as well as figurative tools,” said Potter, whose employer, Colossal Media, is donating paint for the project, while Sprocket is providing apprentice kits. Professionally, Potter got his start creating sets and scenic design for the city’s Gamut Theatre.

Mulberry Street bridge murals are sponsored by M&T Bank, the Pennsylvania College of Art & Design, and grant funding from The Foundation for Enhancing Communities (TFEC).

“The new mural for the Mulberry Street Bridge between downtown Harrisburg and South Allison Hill will be an amazing addition to our city and that important thoroughfare,” said Brittany Brock, M&T Bank vice president and business banking senior relationship manager in Harrisburg. “I drive across the bridge many times a week, and I can’t wait to see the vibrant colors and montage of people that will help to bring that walkway to life. M&T’s contribution for the Mulberry Street Bridge mural is another way we’re showing our support for efforts to improve the communities where we live and work.”

After several weather-related delays in August, Sprocket will create its first mural in Steelton, beginning Sept. 1, or as soon as the remnants of Hurricane Ida clear. Sponsored by and located at Mid Penn Bank, 51 S. Front St., a giant mural wall (124 feet in length, standing 10 feet high) will pay homage to themes chosen by surveyed residents—history, diversity and the people of Steelton.

“As the only bank in Steelton, we are dedicated to supporting the community in many different ways, and we see this mural as a way to honor Steelton’s history and inspire its bright future,” said Heather Hall, Mid Penn Bank executive vice president and market president.

“It’s an extremely exciting coincidence that two of our largest-scale mural projects—the Mulberry Street Bridge and Mid Penn Bank in Steelton—will be created simultaneously,” Caruso said. “It’s rewarding to reach into neighboring Steelton to extend our mission of uplifting people through art.”

Pocket park: Artist Gloria Jean Martin has completed “The Pollinators,” a mural sponsored by the state Department of Environmental Protection (DEP) to bring attention to the importance of bees and other pollinators, whose population is declining amid climate change. Located along Midtown Harrisburg’s Patrick Alley, the mural features floral designs, bees and butterflies, to match the pocket park’s gardens of native pollinator-friendly plants donated by Manada Conservancy and planted by community volunteers.

“The department is happy to support Sprocket’s environmental education project. The project’s mural component is an innovative tool to increase awareness about climate change,” said Kathleen Banski, DEP environmental education program coordinator. “The artwork, and the immersive local experience of walking through pocket park, helps deliver a meaningful message about the vital roles native plants and honeybees play in our environment—which project leaders hope will ultimately resonate in people’s hearts, minds, and habits.”

Additional funding for “The Pollinators” comes from Homeland Center, LINKBANK and the Auchincloss Family Fund at TFEC.

“Part of Homeland’s mission is investing in the communities we serve. The pocket park is a wonderful example of exemplary community service to the Harrisburg community. We are proud and honored to be able to support this endeavor. Kudos to Sprocket Mural Works for the important work they are doing,” said Wendy Shumaker, director of marketing, Homeland Center and Homeland at Home.

“LINKBANK is thrilled to support the Midtown Historic District through our contribution to Sprocket Mural Works. Our mission to ‘Positively Impact Lives’ becomes fulfilled as we continue to support our communities through projects like this,” said Cheryl Howard, LINKBANK regional president, Capital Region.

“The Auchincloss Family Fund at The Foundation for Enhancing Communities celebrates the energy and vitality of the Midtown Historic District. Contributing to Sprocket Mural Works assures us that this energy will become visible,” said Susan Auchincloss.

Welcome back, Brandon Spicer-Crawley: A 2019 Harrisburg Mural Festival artist, Brandon Spicer-Crawley of the Philadelphia area returns to extend his mural on the Millworks Lumber Storage Building off N. 4th Street. Sprocket is proud to provide a platform for this both talented and intellectually disabled artist. His mural is sponsored by Pennsy Supply, Inc.

“Pennsy Supply, Inc. has been in the heart of Central Pennsylvania for 100 years. We believe that art is fundamental to our humanity to inspire us, foster creativity, and bring us all together—regardless of our differences. We’re excited to be a part of supporting Brandon’s artistic journey and we’re proud to sponsor the beautification of the city that Pennsy Supply calls home,” said a Pennsy Supply spokesperson.

Furry friends: The importance and joy of pet adoption will be highlighted in a mural funded by corporate sponsor Chewy, located at Anastacia’s Restaurant, 1535 N. 6th St., Harrisburg. This mural is also being produced in collaboration with—and to raise awareness of—the Humane Society of Harrisburg.

Background: The 2021 Harrisburg Mural Festival is Sprocket’s third biennial summer festival. The majority of Sprocket’s 47 murals were created during the 2017 and 2019 Harrisburg Mural Festivals by local, regional, national and international artists. This year, rather than planning a concentrated 10-day mural festival taking place simultaneously at multiple locations, Sprocket is organizing continuous, summer-long mural projects popping up throughout the city.