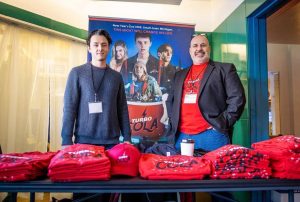 Brandon Keeton won a scholarship in an acting contest his senior year of high school–but he didn’t take it.

Instead, he joined the Marine Corps, a choice that Keeton described as the “best life decision [he’s] ever made.” But after serving for 21 years and opening a martial arts academy, Tiger Rock Martial Arts in Camp Hill, Keeton decided to return to his passion for theater.

In June, the Camp Hill resident released his film, “Turbo Cola,” produced by Keeton and filmed in New Cumberland.

The movie, directed by Luke Covert of Lemoyne, can be described as “The Breakfast Club” meets “Oceans 11”–a heist film about teenagers who rob a gas station on New Year’s Eve 1999. Keeton was introduced to the script, written by Samantha Oty, at a playwriting contest, reworking it to make it easier to film.

New Cumberland residents may recognize the gas station used in the movie as the Quality Gas Station at 101 Bridge St. It’s still a working gas station, which created a challenge when filming.

The film was shot after hours, from 9 p.m. to 6 a.m. The crew had to remove historically inaccurate signage, like Red Bull advertisements and the prices of cigarettes, before filming each night and put it all back before the station opened again the next morning. Whatever they couldn’t fix, viewers called them out on social media, Keeton said.

“I had to fly out an active-duty Army guy who took leave to be in our movie,” Keeton said. “He was a pretty big guy, and his job was to lift heavy things.”

The film had five months of pre-production, with two weeks of shooting in December 2020.

“The actors were always on the ball,” Keeton said.

Keeton got his start as an actor in Scott’s Lawn Care commercials. Eventually, the company went with bigger names, especially for their big Super Bowl ad.

“It took three A-listers to replace me,” Keeton said.

In March 2020, he was getting ready to open a second Tiger Rock Martial Arts location. On the day classes were set to start, the government announced a mandated lockdown due to the pandemic.

Being only two months into his acting career, Keeton took his grandmother’s advice and “threw himself” into the industry by contacting the director of his Tiger Rock commercials, Covert, and asked if he wanted to make a movie. From there, “Turbo Cola” was born.

“Turbo Cola” is distributed by Giant Pictures. It is available for streaming on Amazon, Apple TV, Google Play, Vudo and XBOX.

Keeton is currently looking for investors for his next film project and said it will also take place in the area.

“It was really cool to showcase central Pennsylvania,” he said.